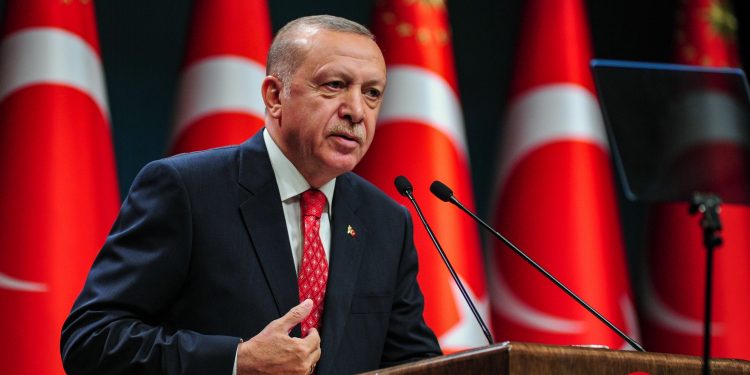 Mr Erdogan claimed one of Turkey’s ships had been attacked and he had already acted on the warning but did not give further details. In a speech in Ankara he said: “We said that if you attack our Oruc Reis you will pay a high price, and they got their first answer today.”

The ship is currently exploring for oil and gas in the highly disputed waters.

Turkish authorities said the Oruç Reis would be carrying out the exploratory search in the disputed area until August 23.

Tensions in the Mediterranean have escalated over recent weeks after Greece placed its military forces on high alert following Turkey’s exploration.

After the drillship was escorted by gunboats to begin its seismic research on Monday, Athens called for Turkey to stop the “illegal activities”.

This has since prompted the US, EU, France and Israel to condemn the actions by Turkey.

Greek Prime Minister, Kyriakos Mitsotakis, told the country on Wednesday night: “Our country does not threaten [anyone], but nor can it be blackmailed.

“Let it be known to all: the risk of an accident lies in wait when so many military forces gather in a limited area.”

Both Turkey and Greece said this week they were willing to resolve the dispute over their overlapping maritime claims, but vowed to protect their interests and blamed the other side for the stand-off.

“The path to a solution in the eastern Mediterranean is via dialogue and negotiation,” Erdogan said earlier on Thursday.

“If we act with common sense and reason, we can find a win-win solution that meets everyone’s interests. We are not chasing any unnecessary adventures or seeking tensions.”

Mr Erdogan claimed Greece was being pushed into taking “wrong steps” in the region by “a country that doesn’t even have a coast in the eastern Mediterranean”, a direct reference to France.

French President Emmanuel Macron tweeted: “The situation in the eastern Mediterranean is worrying.

“These must end in order to allow a peaceful dialogue between neighbouring countries and allies within NATO.

“I have decided to temporarily strengthen the French military presence in the Eastern Mediterranean in the coming days, in cooperation with European partners including Greece.”

German Chancellor, Angela Merkel, also reportedly spoke with Mr Erdogan and Mr Mitsotakis about their dispute over energy exploration in the eastern Mediterranean, a German government spokesman said on Thursday.

He declined to give any detail of the substance of the conversations.

Constantinos Filis, a professor of international relations, warned there could be a “serious clash” between Greece and Turkey.

He said: “On a scale of one to 10, I would say bilateral tensions are at a level of seven to eight.

“This could easily erupt into the most serious crisis between Greece and Turkey in almost 25 years.

“Room for human error is very real if Turkey continues on this path of revisionist brinkmanship.”

The eastern Mediterranean region is rich in natural resources and deep sea gas fields have been found off Egypt and then Israel and Cyprus.

Egypt and Israel have found enough gas reserves to become energy sufficient for the foreseeable future.