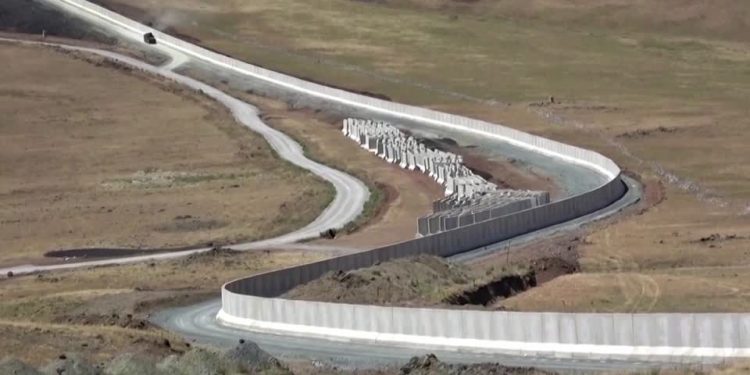 Brussels (Brussels Morning) Turkish officials noted that the country has constructed 156 kilometres of wall along the border with Iran and added that an additional 90 or so kilometres will be built.

The concrete wall on the border with Iran is topped with barbed wire and limits the flow of migrants into the country, with Turkish security officials reportedly fearing that tens of thousands of Afghan nationals are gathering on the Iranian side.

Turkey took in millions of refugees and migrants in 2015 and 2016 in exchange for billions in financial aid, but construction of the wall shows the country’s position has changed.

The Taliban takeover of Afghanistan has sparked fears in Europe that the migrant crisis from 2015 could be repeated, but the United Nations reported no “large-scale” movement of people from Afghanistan after the Taliban retook the country.

According to EU officials, the number of Afghans arriving in the bloc has dropped about 40% in the first half of 2021, largely due to border restrictions aimed at controlling the coronavirus pandemic.

Metin Çorabatır, former spokesman of the UN High Commissioner for Refugees (UNHCR), pointed out that Afghanistan’s neighbour Iran was able to absorb previous flows of migrants from the country.

However, he stated that US-led sanctions over Iran’s nuclear programme ruined the country’s economy and limited its ability to take in migrants and refugees.

He reminded that Iran “hosted two million Afghans during the 1979 Soviet invasion,” but pointed out “to what extent Iran could provide protection to new arrivals, we don’t know yet.”

Turkey has previously insisted that it is not planning to be “the border guard or refugee camp of the EU” while the bloc is stepping up efforts aimed at preventing Afghans from coming, according to the UK’s Daily Telegraph reporting on Wednesday.