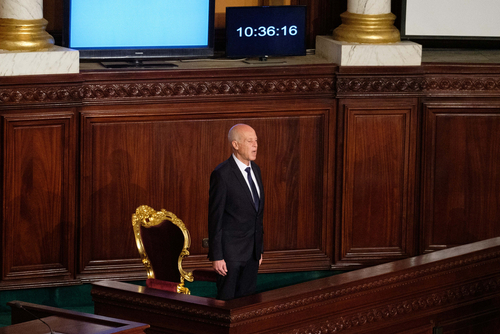 Brussels (Brussels Morning) Tunisia’s President Kais Saied pledged on Monday to appoint a new prime minister, but offered no indication as to when this might happen, just as he made no mention as to when he might roll back the emergency measures he introduced in July.

Speaking from Sidi Bouzid, Saied did announce that the emergency measures would continue. He also said that a prime minister would be appointed eventually, selected “on the basis of transitional rulings responding to the will of the people”.

Addressing a large crowd in the municipality identified as the cradle of the 2011 revolution that sparked the so-called Arab Spring movement, Saied blasted the country’s legislature as a “marketplace where votes are bought and sold”. He even claimed that parliamentary sessions get paused so that “the price can be agreed”.

Saied, an independent elected in 2019 on an anti-corruption platform, plunged the country into a constitutional crisis in July this year, when he ousted the government and suspended parliament for a period of 30 days by invoking a “special measures” provision of the constitution.

The President argued that the coronavirus pandemic and the failing economy represented an “imminent threat” to the country, such being required in order to activate the constitutional provision.

His move sparked widespread concerns, as the body intended to keep the president’s constitutional powers in check, the constitutional court, has yet to be established in Tunisia. Moreover, none of the actions Saied has since taken were explicitly listed in the country’s laws.

His takeover of power was widely welcomed by the country’s citizens, many of whom felt betrayed by the ruling Islamist Ennahdha party. However, rights groups have been warning about signs of a slide towards authoritarianism.

The 30-day suspension of parliament and the introduction of special powers were extended by a further 30 days in August. On Saturday, Ennahdha supporters took to the streets of Tunis demanding a return to parliamentary democracy.