Trump’s Positive Test Does Not Create a Governance Crisis 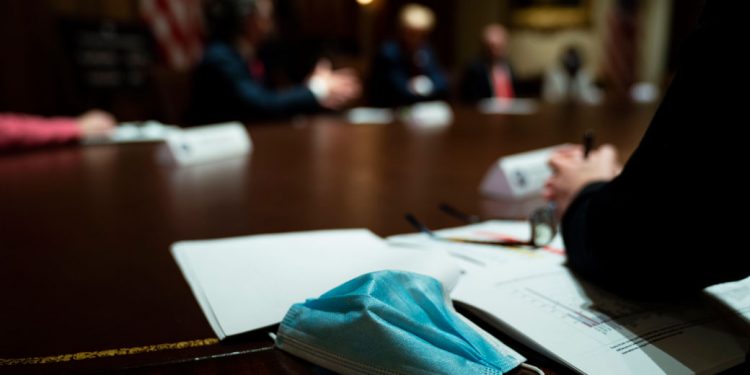 On Friday morning, Americans woke up to the news that Donald Trump has tested positive for Covid19. Given the news from the previous day, that presidential advisor Hope Hicks, who had recently traveled with the president, has tested positive, this news was not altogether surprising. It was nonetheless unnerving and one more twist in a year that has been unlike any other. Many Americans have felt like we have been living in a horror movie, but it is now clear we are living in a surrealistic short story. We’ve gone from Stephen King to Gabriel Garcia Marquez.

Given the tenuous relationship between this administration and the truth, the first question many people had to ask is whether or not this story is, in fact, true. While the President contracting a highly contagious and potentially fatal news is extremely important and sobering news, there are also many reasons why this president, trailing this badly in the polls would concoct this story. A positive Coronavirus test allows the president to avoid another debate, as it has now become clear that he lost the first debate to Joe Biden. It also means that Trump can stop holding poorly attended rallies that only appeal to his political base. A positive test allows Trump to shift the story from the flood of bad news around his taxes, the economy and the spread of the pandemic, to his own personal health and potential recovery. Lastly, fabricating a positive test would allow Trump to seem to have magically defeated the virus after a few days. As we learn more, it becomes increasingly likely that the story is true, but for most of the day on Friday, many Americans were doubting its veracity. That is a troubling but accurate reflection of the extent to which many Americans, for very good reasons, distrust this White House.

Late Friday, Trump was admitted to Walter Reade Medical Center where he has been receiving treatment. It is still not entirely clear how ill the president is, so this could still go in one of several ways. Trump could get lucky and after a few days be relatively healthy; he could remain quite ill for several weeks; and despite having access to excellent medical care, he might not survive. Each one of these outcomes would upend the political moment in different ways.

Although it is unlikely, if he recovers quickly and fully, Trump and his supporters will point to this episode as evidence both of Trump’s health and virility but also of the notion that Covid is not as grave a threat as many think. For those inclined to believe that Covid is a hoax and that shutting down parts of the economy is a liberal plot to harm Trump, a quick Trump recovery will reinforce these harmful views.

There is also a possibility that Trump’s illness is severe and Trump will not be back on the campaign trail before the voting, which has already begun in several states and concludes on November 3rd. This may not have a dramatic effect on an election itself because most voters made up their minds months ago, but it will eventually raise concerns about the wisdom of Trump remaining on the ticket. Obviously, if he does not survive, the election will be thrown into further turmoil, but the most likely outcome would be that he would be replaced on the ticket by his running mate Mike Pence, who would still almost certainly lose to Joe Biden.

Not a crisis of governance

While Trump’s positive test is an enormous story that will dominate the media for at least a few more days, and perhaps much longer, its impact on how the American government functions should not be overstated. Trump’s illness may be a dramatic story, but it is not a governance crisis for the simple reason that Donald Trump has never really governed in any meaningful sense of the word. He has tweeted, issues sometimes cryptic and sometimes fantastical policies and demands, and done some of the very basic tasks of being president, such as appointing justices, but mostly he has used his office to rant, engage in bigoted rhetoric, undermine American democracy, complain about being treated unfairly and enrich himself. If he is unable to do those things for a few days, the country will not exactly cease to function. The most glaring evidence of Trump not governing has been his role in combating Coronavirus, the disease that he is now fighting. Trump failed utterly to craft and implement a strategy for addressing the biggest crisis the US has faced in many years. Instead, he lied, distracted, undermined the scientists and doctors, embraced quackery, set Americans against each other and stood by as more than 200,000 Americans succumbed to the pandemic.

Despite Trump being in the hospital, all of the basic service delivery, administrative and mid-level decision making of the various government departments and agencies will continue as usual because even in a functioning administration these things rarely require the day to day involvement of the president. If a crisis emerges – that is to say a crisis even more grave than the current pandemic – and Trump is unable to respond, that will raise some challenges, but given Trump’s unfailing ability to raise tensions and make poor decisions, it is difficult to imagine how his absence would make things worse.

The focus of the world’s attention

Trump’s positive Covid test places him at the center of the US, and the world’s, attention. We are all waiting for the next medical report, further news of his condition and the latest information about who else in Trumpworld has tested positive. For a man whose need for attention knows no bounds, this is no small thing. Ironically, Trump’s illness also underscores another, and paradoxical, dynamic. For many Americans Trump is no longer relevant. In a very real way America has moved beyond Trump. His utter failure to address, or even try to address, the pandemic, has led many Americans to simply stop listening to him. Although he is still president, he has not been America’s leader for months.

Trump’s illness highlights his reduced relevance, particularly with regards to real matters of governance. Any time an American president is hospitalized with a potentially life threatening condition it is almost axiomatically an event of national, even global, significance, but beyond that Trump’s condition changes little. Before his illness struck, Trump was a broadly unpopular president, who has spent much of his time in office golfing or watching television, is trailing badly in his reelection campaign and has more or less given up on the harder work of governing. His positive Covid test and whatever direction his illness takes will not change that.

Trump’s illness is, with the benefit of a few day’s hindsight, the almost inevitable direction America’s story was going to take in 2020. While the world watches to see what will happen next and, America follows the latest chapter in the surreal and frightening show that is the Trump presidency, we should recognize that for many Americans Trump marginalized himself months ago and his illness, while a compelling news story, is no more a crisis of governance than the one that began in January of 2017 when Trump took office.