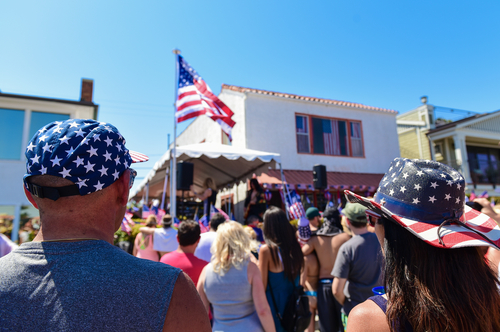 The USA, (Brussels Morning Newspaper) I recently had an exchange with an old friend about the concept of Trumpism without Trump. My friend quipped that “it’s only Trumpism if it comes from the Trumpee region of France, otherwise it’s just sparkling fascism.” This was obviously a goofy riff on the difference between sparkling wine, which can come from anywhere, and champagne, which must come from the Champagne region of France. However, like with most good jokes, there was real insight there as well.

The idea of Trumpism without Trump being an important political dynamic in the US has received increasing attention in recent weeks. Much of this has consisted of speculation about who the post-Trump leader of the party, and bearer of the MAGA mantle, might be with Florida Governor Ron DeSantis emerging as the leading contender. Another analysis has posed the question of what Trumpism is and how powerful a force it might be in American politics without the active participation of Donald Trump.

The problem with all this analysis is that it seeks to treat Trumpism as a cohesive political ideology rather than as a phenomenon that is deeply tied to the person of Donald Trump. In other words, the idea of Trumpism without Trump overlooks the extent to which Trumpism is, in many ways, at least as much of a cult as a political movement. It may be a cult whose popularity is waning, as some have suggested, but it is still a cult. Therefore, as my friend suggested, if you take Trump out of Trumpism you are left with garden variety fascism, or if you want to be charitable, garden variety right-wing populism. Thus, while there are many such as DeSantis, propagandist Tucker Carlson, Senator Josh Hawley of Missouri, and Governor Kristi Noem of South Dakota, who could lead a post-Trump GOP, none could reproduce the true gestalt of Trumpism.

The cult element of the politics surrounding Donald Trump should not be overlooked because to do so understates the damage Trump has done to American politics and the potential for future damage. Right-wing populism in various forms is not at all new to American politics. It has always existed, and it is not hard to see the connections between Trump and similar politicians like George Wallace or Ronald Reagan who like Trump stoked racial tension. Just as Trump saw democratic hoaxes and the deep state as the enemy, Wallace blamed “pointy-headed bureaucrats” and Reagan blamed “the government” for all of America’s problems. Like Trump, these types of politicians appealed to the resentments of older white voters and portrayed America as being threatened by the left and racial minorities. Trump was more successful than Wallace and more explicit than Reagan, but the connections are clear. However, Trumpism is much more than that.

Trumpism, and membership in the Trump cult, mean blind loyalty to the ranting, aggrieved, angry, disconnected from the real person that is Donald Trump. It requires a belief that if Donald Trump says something it must be true and, if necessary, putting yourself at risk of death from a deadly disease to prove that point. Cult membership includes the view that Donald Trump can do absolutely no wrong and that the obese and unhealthy Donald Trump is really a muscle-bound fighter and paragon of masculinity. Without these ugly and surreal cult components, Trumpism does not exist.

Despite this, it is true that the MAGA faction has taken over the Republican Party and that given Trump’s age and declining physical and mental health, it is not too early to think about who will lead the party if Trump himself is unable to run again in 2024. And make no mistake, if his health holds out, he will run. Over the last seven years, it has been impossible to tell the story of the GOP as distinct from Trump himself. For much of this time, the erratic behavior, plain-spoken bigotry, avarice, and sleaziness of the former President has been a feature, not a bug, of the Republican message and of Trumpism, but it will not outlast Trump himself.

The marriage of far-right populism with a cult leader that encouraged his followers to put themselves at risk of a deadly disease, demanded complete loyalty, and was just downright weird was indeed sui generis in American politics, but that is what Trumpism was-and is. When Trump exits the political stage, Trumpism will leave with him, but the danger raised by the MAGA movement and the transformation of American politics that Trump ushered in will remain.

The post-Trump Republican Party will shake off the more cultish elements that surround the demented charlatan that is its current leader and, barring a dramatic change, will settle in as an authoritarian movement that seeks to weaken American democracy and usher in a white nationalist populist regime-and that is at least as devastating as Trumpism has been.