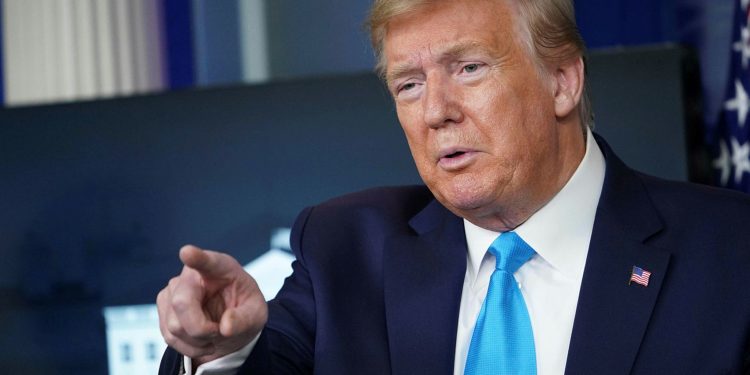 Donald Trump has promised unilateral action to provide economic relief for millions of Americans hit by the coronavirus pandemic, but he offered few specific details and admitted the move is likely to face legal challenges.

The president’s pledge to rescue people from poverty and homelessness took place against the unlikely backdrop of his luxury golf club, where annual fees run to hundreds of thousands of dollars a year, with members in T-shirts not physically distancing as they watched and applauded him.

Trump called the sudden press conference at his club in Bedminster, New Jersey, on Friday evening after the collapse of talks between White House and Democratic negotiators in Washington. “If Democrats continue to hold this critical relief hostage, I will act under my authority as president to get Americans the relief they need,” the president said.

He vowed to suspend payroll tax and extend unemployment benefits until the end of the year, defer student loan payments indefinitely and forgive interest, and extend a moratorium on evictions.

Asked when the executive orders would be ready, Trump said it “could be by the end of the week. They’re being drawn by the lawyers right now.”

Trump has frequently tested the boundaries of executive power and many experts have argued that spending money on relief efforts without congressional authorisation would be inviting a battle in court.

Crooked Media, run by alumni of the Barack Obama administration, observed in its daily newsletter: “Trump may be able to defer payroll tax collection, but he can’t override employers’ legal obligation to withhold those taxes from worker paychecks, meaning workers would probably get no extra cash in their pockets, and if they did, they’d have to pay it all back to the government eventually.”

Asked whether he was concerned about the legality of the orders, Trump replied nonchalantly: “No, not at all, you always get sued. Everything you do you get sued. We’ll see.”

A last-ditch effort by Democrats to revive Capitol Hill talks came to nothing earlier on Friday, making it increasingly likely that Washington gridlock will mean more hardship for millions of people.

Chuck Schumer, the top Senate Democrat, said: “It was a disappointing meeting,” adding that the White House had turned down an offer to curb Democratic demands by about a trillion dollars – from $3tn to $2tn.

He urged the White House to “negotiate with Democrats and meet us in the middle. Don’t say it’s your way or no way.”Advertisementhttps://296a5befbd12ea1cc1be35f77806f47e.safeframe.googlesyndication.com/safeframe/1-0-37/html/container.html

The treasury secretary, Steven Mnuchin, said: “Unfortunately we did not make any progress today.” Republicans said the House Speaker, Nancy Pelosi, was relying on budget maneuvers to curb costs and contended she has overplayed her hand.

The impasse means a longer and perhaps permanent expiration of a $600-a-week bonus pandemic jobless federal benefit that has kept millions of people from falling into poverty.

It denies more than $100bn to help schools reopen this fall. It blocks additional funding for virus testing as cases are surging this summer. And it prevents billions of dollars reaching state and local governments considering furloughs as their revenue craters.

Other priorities are also languishing, including a fresh round of $1,200 direct payments to most people, a cash infusion for the struggling US Postal Service and money to help states hold elections in November.

Both the House and Senate have left Washington for the August recess, with members sent home on instructions to be ready to return for a vote on an agreement.

With no deal in sight, their absence raises the possibility of a prolonged stalemate that stretches well into August and even September.

Pelosi summoned Mnuchin and Mark Meadows, the White House chief of staff, in hopes of breathing life into the negotiations, which have been characterized by frustration and intransigence on both sides – particularly on top issues such as extending the bonus pandemic jobless benefit that expired last week.

But negotiations broke down on Friday. Pelosi told reporters she had offered a major concession to Republicans.

“We’ll go down $1tn, you go up $1tn,” Pelosi said. The figures are approximate, but a Pelosi spokesman said the speaker is in general terms seeking a “top line” of perhaps $2.4tn since the House-passed Heroes Act is scored at $3.45tn. Republicans say their starting offer was about $1tn but have offered some concessions on jobless benefits and aid to states, among others, that have brought the White House offer higher.

Mnuchin said that renewal of a $600-a-week pandemic jobless boost and huge demands by Democrats for aid to state and local governments are the key areas where they are stuck.

Pelosi and Schumer continue to insist on a huge aid package to address a surge in cases and deaths, double-digit joblessness and the threat of poverty for millions of the newly unemployed.

At his press conference, Trump reiterated his claim that America is winning the battle against the coronavirus, even as the number of reported cases nears 5m. “It’s disappearing, it’s going to disappear,” he said.

The US is only 5% of the world’s population but has conducted 25% of all the world’s tests, he added. “We’re doing tremendous testing and we’re especially doing big testing at the nursing homes.”

The president also promised an executive order requiring health insurance companies to cover pre-existing conditions – already law under Obama’s Affordable Care Act, which Trump is seeking to overturn. He announced that aid would be sent to Lebanon following this week’s massive explosion in Beirut.

Playing to the gallery, the president could also not resist some digressions into electoral politics, warning of a threat of “leftwing violent extremism”. He said: “Joe Biden is a puppet, he’s merely a puppet. If the radical left gets in, they look at Portland as a thing that they want.”

The club members crowding in the room were apparently in violation of New Jersey guidelines for golf clubs. Trump defended them by saying they were engaging in “peaceful protest” against the “fake news”.