Trump Lost but Democrats Didn’t Get the Win They Wanted 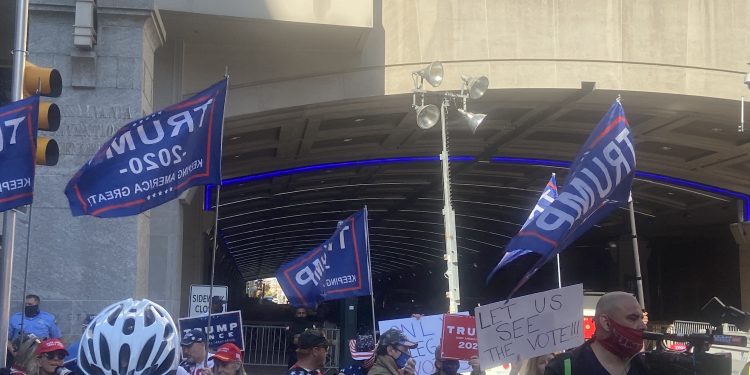 Joe Biden’s victory will save the country from the irreparable and devastating impact of a second Trump term, but the election did nothing to address the deeper problems of extreme polarization.

New York (Brussels Morning)  The 2020 Election, one of the most anticipated, closely watched, competitive and strangest in American history is finally over, sort of. Barring deus ex Supreme Court or some similar extraordinary development, Joe Biden will win and become the next president of the United States. Donald Trump’s complaints about the election being stolen from him, incitements to violence among his base and other attempts to undermine the will of the people are not getting much traction outside of his most loyal supporters. However, other than the hugely important victory for the Biden-Harris ticket, this election was a disappointment for Democrats, progressive and critics of Donald Trump.

Although the Biden landslide that many Democrats hoped for was always a bit of a stretch, almost all of the pre-election polling and projections indicated a solid win for Biden, the Democrats being slight favorites to win back the senate and increasing their majority in the House of Representatives. There was even some discussion of Democrats turning over a few state legislatures even in Texas. As the dust settles, Biden’s margin of victory looks to be solid as he will likely end up with 306 electoral votes and a roughly five point lead in the popular vote. However, the GOP will likely be able to retain control of the senate, although they will have to win a January runoff in one of the two Georgia seats to do that. Additionally, the Democrats will lose seats in the House and the Texas state house will remain in Republican hands.

The Democrats’ underperformance will lead to a lot of hand-wringing about the Biden campaign, the Democratic message and strategy, whether Speaker of the House Nancy Pelosi and senate minority leader Chuck Schumer should remain in their positions and, in general, what is wrong with the Democrats. Clearly the Democrats will have to do some soul searching after this campaign, but a better, and tougher, question to ask would be what is wrong with America. After spending much of this week sorting through all the late vote counting, scrutiny of important counties like Maricopa in Arizona and Wayne in Michigan, explanations of the odd and undemocratic quirks of the electoral college, and, in general, the labyrinthine presidential election system, we are stuck with the unalterable reality that almost 70 million Americans, representing more than 45% of those who voted, looked around at the racism, democratic rollback, ties to the Kremlin and 230,000 deaths from Covid-19 and decided it was a good idea to give Donald Trump four more years in office.

The deeper problem of extreme polarisation

That reality makes it clear that although Trump lost, the election was in no way an unequivocal repudiation of Donald Trump or of Trumpism, whatever that is. The American people had their dalliance with authoritarianism and then decided that maybe they wanted more. Joe Biden’s victory will save the country from the irreparable and devastating impact of a second Trump term, but the election did nothing to address the deeper problems of extreme polarization, a Republican Party that has become increasingly dominated by authoritarian and racist impulses and a Democratic Party that, with the economy reeling and more than 230,000 dead from a pandemic that has been murderously mishandled by Donald Trump, still struggled to resonate with huge swaths of the electorate.

Donald Trump may not have won reelection, but he demonstrated that he still has a very strong and loyal base. It is possible those voters will quickly move on from Trump and go back to either less destructive political movements or simply withdraw from politics. However, it would be unwise to assume that is going to happen. It is more likely that Trump’s supporters, and possibly Trump himself, will remain a very significant force in the Republican Party.

This will mean that the Republican led senate will be more likely to go down the path of obstruction, investigations and attacks rather than compromise or cooperation with President Biden. This will all but guarantee that Joe Biden will struggle to pass any major legislation. Those who went to the polls and voted for Biden because they wanted sweeping legislation on climate change, major economic stimulus to help the country recover from the pandemic, police reform or any other similar policies will be disappointed, as it is very likely that Mitch McConnell will essentially have a veto over all legislation.

The strong Republican showing will not just hamstring Biden’s policy ambitions, but it means that many of the most destructive aspects of American political life over the last few years are not going away. The conspiracy mongering from Q-Anon, Fox News and indeed many Republican office holders is here to stay. The violent right-wing militia groups are not going away and will likely be cheered on by Donald Trump in his post-presidential life. A Republican controlled senate will also make sure we never have a full investigation of Russia’s role in our political life, the disastrous mishandling of the coronavirus or the corruption that has always been at the center of the Trump presidency.

Biden’s victory was a deeply necessary but unambiguously insufficient step toward building a more democratic America, whereas a Trump victory would have closed off that option for some time. However, the legacy of the Trump era is deep. It did not emerge out of nowhere and will not fade away easily. It is easy to offer platitudes about how Joe Biden needs to work to reach across the aisle and bring the country together — and he has already unequivocally indicated he will do that. However, whatever Biden does to bring the country together will have no meaningful impact until the Republican leadership wrestles with the damage Donald Trump did and their role in allowing it to happen.