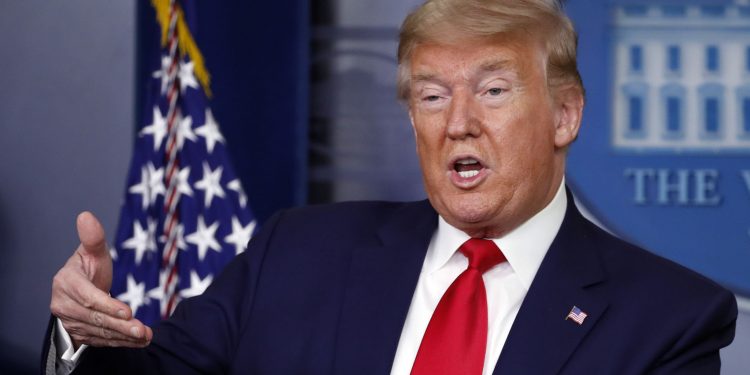 Donald Trump used his White House coronavirus press conference on Monday to repeat his opposition to lockdowns as a means of bringing the contagion under control, claiming falsely that under his leadership the US has done “as well as any nation”.

On a day that the US had surpassed 4.7m confirmed cases of infection – more than a quarter of the global total – Trump tried to deflect criticism of his administration’s handling of the pandemic on to other countries.

In Germany, the total number of confirmed cases stands at 212,000, with fewer than 1,000 new cases per day. By comparison, new cases in the US are beginning to plateau but at an extremely high level of about 60,000 a day.

Focus is now switching to states in the heartlands of the country such as Tennessee, Oklahoma and Missouri, where the virus is spreading fast. Trump tried to assuage fears for those areas, saying: “I think you’ll find they are soon going to be very much under control.”

There is concern that the virus is also extending its tentacles out of major urban and suburban population centers into the rural parts of America. On Monday, Trump signed a new executive order aimed at providing a lifeline to struggling hospitals and health centers in rural areas, while also extending telehealth services across the country, after virtual visits soared during the coronavirus pandemic.

Trump, who is counting on votes from backers in rural areas in the 2020 presidential election, said the new order would ensure that telehealth services expanded during the pandemic remained in place even after the public health emergency ended.

The death rate in the US, which stands at almost 156,000, is still rising in 30 states, according to data compiled by the New York Times.

Despite these alarming figures, Trump claimed that under his leadership the US was “doing very well”. He dismissed mounting criticism that the federal government has consistently failed to tackle the virus, insisting that lockdowns did not work.

“It’s important for all Americans to recognize that a permanent lockdown is not a viable path forward and would ultimately inflict more harm than it would prevent. Lockdowns do not prevent infection in the future,” he said.

The statement was misleading. Lockdowns can prevent future infection if, once they have contained the virus, a system of aggressive testing and contact tracing is put in place to detect any local flare-ups – something that the US government has also notably failed to do.

Trump attempted to defuse tension between him and his public health expert Dr Deborah Birx. Earlier on Monday, the US president turned his ire on Birx, a previous favorite of his, after she had sounded the alarm publicly over how “extraordinarily widespread” the virus had become.

“She’s a person I have a lot of respect for,” Trump said at the press conference. He went on to state that with Birx’s help his administration had tested Americans for coronavirus at a rate unsurpassed by any other country.

In fact, the US continues to lag dramatically behind the testing target it needs to reach if it is to have a hope of containing the virus. Researchers at the Harvard Global Health Institute have found that the US is “nowhere near where we need to be” in terms of the 4m tests a day that they estimate would be needed to get a grip on the contagion.