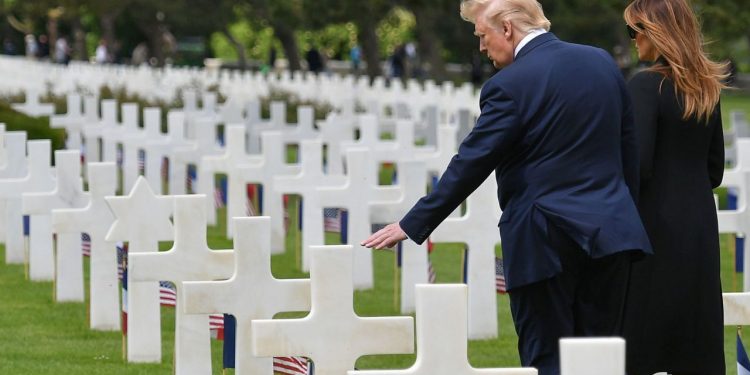 Donald Trump canceled a visit to pay respects at an American military cemetery outside Paris in 2018 because he thought the dead soldiers were “losers” and “suckers” and he did not want the rain to mess up his hair, according to a new report.

At the time, Trump explained the cancellation by saying his helicopter could not fly in the rain and the Secret Service would not drive him to Aisne-Marne American cemetery, where 1,800 US marines who lost their lives in the first world war battle at Belleau Wood are buried.

Neither public claim was true, according to “four people with firsthand knowledge of the discussion that day” quoted in a new report by Jeffrey Goldberg in the Atlantic.

“Why should I go to that cemetery? It’s filled with losers,” the report quotes Trump as saying. Trump also called the war dead “suckers” for getting killed, the report says.

Trump also asked aides, “Who were the good guys in this war?” and did not understand why the United States would intervene on the side of the Allies, the Atlantic report says.

Trump denied the report on Twitter Thursday evening. “I never called our great fallen soldiers anything other than HEROES,” he wrote. “This is more made up Fake News given by disgusting & jealous failures in a disgraceful attempt to influence the 2020 Election!”

But the report was supplemented on Friday morning by the Washington Post, which quoted “a former senior administration official” as saying that Trump “frequently made disparaging comments about veterans and soldiers missing in action, referring to them at times as ‘losers.’”

The Post quoted “a person familiar with the discussion” as saying that Trump told senior advisers he did not understand why the US government valued finding soldiers missing in action “because they had performed poorly and gotten caught and deserved what they got.”

Trump himself told reporters on Thursday the story was false. “To think that I would make statements negative to our military and fallen heroes when nobody has done what I’ve done,” for the US armed forces, Trump said. “It’s a total lie. It’s a disgrace.”

Joe Biden, the Democratic presidential nominee, issued a statement on the allegations: “If the revelations in today’s Atlantic article are true, then they are yet another marker of how deeply President Trump and I disagree about the role of the president of the United States.”

Support for Trump among service members had already appeared to be slipping before the new report. Trump has a minus-12 (38-50) favorability rating among members of the military, according to a recent Military Times poll – down from plus-9 (46-37) at the start of his term.

Trump avoided service in Vietnam through a diagnosis of bone spurs by a late doctor whose daughters told the New York Times that the diagnosis was granted as a favor to Trump’s father, Fred Trump, who was the doctor’s landlord.

Trump has a long history of making dismissive or insulting comments about members of the military and insulting family members of fallen soldiers. After his impeachment hearings earlier this year, Trump attacked a star Democratic witness, Lt Col Alexander Vindman, as having “problems with judgment” and “leaking information” – charges a Vindman lawyer denied. Vindman was ousted from the national security council after testifying at the impeachment hearings.

During the 2016 presidential campaign, Trump attacked the gold star family of Khizr and Ghazala Khan, whose son Cpt Humayun Khan was killed by a suicide bomber in Iraq in 2004. The couple spoke at that year’s Democratic national convention in protest of the president’s attacks on Muslims, saying Trump did not understand their son’s service or their sacrifice.

And Trump clashed publicly with the late senator John McCain, a navy pilot who was taken prisoner of war and tortured in a Vietnamese prison, where he was held for more than five years. Trump was enraged that McCain criticized him publicly and voted down a Republican effort to overturn Barack Obama’s health care law.

“He was a war hero because he was captured,” Trump said during his presidential run. “I like people who weren’t captured.”

“He lost and let us down,” Trump added. “I’ve never liked him as much after that. I don’t like losers.”

That disdain escalated to fury after McCain’s death in 2018. “We’re not going to support that loser’s funeral,” Trump said, according to the Atlantic report.

When Trump saw flags lowered to half-staff, he reportedly said: “What the fuck are we doing that for? Guy was a fucking loser.”

But on Thursday night Trump tweeted, “I never called John a loser,” and Trump denied objecting to the patriotic arrangements for McCain’s funeral. “The lowering of our Nations American Flags, and the first class funeral he was given by our Country, had to be approved by me, as president, and I did so without hesitation or complaint,” Trump tweeted.

Trump tweeted news coverage in 2015 of his calling McCain a “loser”. Trump also referred to former president George HW Bush as a “loser” for being shot down by the Japanese as a navy pilot in the second world war, the Atlantic reported.

Former members of Trump’s sphere went public on Friday to say that his denials were a lie.

Miles Taylor, a former chief of staff for two Trump department of homeland security (DHS) secretaries, tweeted: “Mr President, this is not true. You were angry that DHS notified federal buildings to lower the flags for Senator McCain. I would know because your staff called and told me.”

“The Atlantic article is accurate,” Cohen tweeted. “I testified, Trump claimed it was because of a bone spur. When I asked for medical records, he gave me none and said there was no surgery. He finished with: ‘You think I’m stupid, I wasn’t going to Vietnam’.”

A defense official also confirmed to the AP reporting in the Atlantic that Trump on Memorial Day 2017 had gone with his chief of staff, John Kelly, to visit the Arlington cemetery gravesite of Kelly’s son, Robert, who was killed in 2010 in Afghanistan, and said to Kelly: “I don’t get it. What was in it for them?”