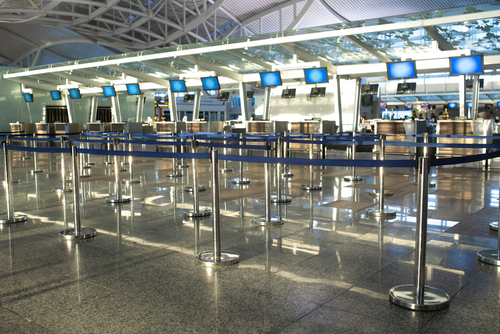 Coronavirus outbreak, empty check-in desks at the airport terminal due to pandemic of coronavirus and airlines suspended flights.

The steep decline came largely because of restrictions imposed to control the coronavirus pandemic, including travel bans and lockdowns.

“Tourism was among the sectors most affected by the COVID-19 pandemic,” Eurostat pointed out, noting that the recorded annual decline of 52% is unprecedented.

Mediterranean EU member states were the worst hit, with the summer destinations of Cyprus, Greece and Malta posting annual declines of about 70%.

In contrast, the decline in the northern EU member states of Denmark and the Netherlands stood at approximately 35%.

The report notes 1.4 billion overnight stays in tourist accommodation last year, down from almost 3 billion the year before. This also marked a reversal of the positive growth trends that have been a feature of the past decade.

The number of overnight stays by foreign tourists dropped 68% across the bloc in 2020, while the decline for domestic tourists stood at 38% of the annual level.

Several EU member states that are dependent on tourism have been supporting the plan to introduce “vaccine passports”, in hopes that such a move would pave the way for a 2021 summer tourist season.

This is one of the proposed remedial measures bloc leaders are to discuss when they meet at the summit slated for next week. The European Commission is pushing for a digital vaccine passport dubbed the “green pass”, to show whether the bearer has recovered from COVID-19, been fully vaccinated, or shown negative test results.

What remains unclear is whether or when the passport will be of use, given the slow progress of the EU’s vaccination campaign and rising numbers of new cases now evident in some member states.