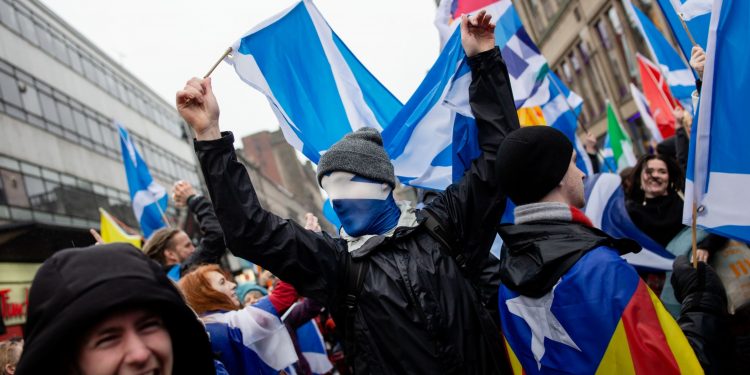 London (Brussels Morning) A political consultancy firm linked to the Conservative party has written a report strategising on how to counter rising support for Scottish independence.

The memo, seen by Bloomberg, was reportedly sent to several people that included Cabinet minister Michael Gove, although it was not a government requested brief.

Written by Hanbury Strategy — set up by former Tory and Vote Leave associates — the leaked document warned against continuing to deny the Scots a referendum as “counterproductive”.

If the pro-independence parties won the next Scottish election, it suggested deploying delaying tactics, including giving Edinburgh more power affirmed through a popular vote.

It also suggested placing pressure on the EU to veto any proposition of Scotland rejoining as an independent nation.

Bloomberg also reported a group was being formed to explore plans further.

The leaked memo emerges after a poll the previous week showed that support for a Scottish referendum had risen to 58 percent, moving on from an earlier 55 percent average support base and a 13 percent rise from the last referendum’s outcome.

Backing for a referendum has been seen this year as the pandemic demonstrated to voters strong leadership from Scottish First Minister Nicola Sturgeon in comparison to UK prime minister Boris Johnson’s chaotic messaging, according to experts.

Brexit has also galvanised mass Scottish sentiment to vote on an independent Scotland as, overall, Scotland voted to remain in the 27-member coalition.

Calls for a second referendum on the constitutional question arose again after the internal market bill appeared to centralise some decision-making power regarding trade regulations with Westminster.

“If the SNP builds on this momentum then the endpoint could be a full-blown constitutional crisis or a second independence referendum”, read the report.

“Either of these outcomes would consume significant political capital for the government”.

The report outlined possible counter-strategies, including a compelling offer for remaining in the Union for voters and an attack strategy against Sturgeon and her government.

However, it noted a lack of leadership within the Unionist movement to challenge pro-independence effectively.

Meanwhile, the SNP members are urging the party to hold a debate at next month’s annual conference for a timeline on ridding Scotland of Trident, the UK’s nuclear program. It is one of the key issues to iron out for a post-independence Scotland, should a referendum be granted and subsequently see the “yes” camp win. Accepted timescales have ranged between three and five years.