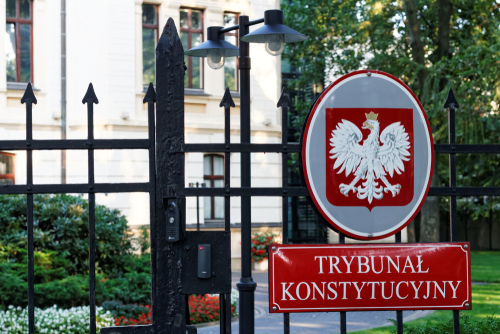 Brussels (Brussels Morning) On Tuesday, the Polish Constitutional Court once again postponed a key ruling on whether EU laws can take precedence over the country’s constitution, an issue which could potentially cause an institutional crisis within the Union and further erode the bloc’s relations with Warsaw.

The Constitutional Court session, originally scheduled for July, was postponed until 22 September, after the Polish Human Rights Ombudsman moved to exempt one of the Court’s justices from the proceedings. Former ruling party parliamentary deputy Stanisław Piotrowicz, the Ombudsman claims, cannot be relied on to reach an impartial verdict due to his prior involvement in judicial reforms as a lawmaker.

In his motion, Ombudsman Marcin Wiącek argued that Piotrowicz’s attitude towards the EU has been marked by far-reaching criticism and hostility, which makes him unfit to rule on the constitutionality of EU treaties.

Warsaw claims that Poland never agreed in the EU treaties to relinquish its sovereignty, saying that placing anything above the constitution would mean Poland is not a sovereign state. The primacy of EU law is, however, one of the key tenets of European integration.

European Values and Transparency Commissioner Věra Jourová stressed that placing EU treaties below national laws would lead to “Europe á la carte”, a model where different EU member states could apply the EU law in whichever way suits them best. “EU law needs one referee, and the referee is the European Court of Justice,” said Jourová.

Ignoring the ECJ rulings could ostracise Poland from the rest of the EU, deepening the divide between the current Polish government and Brussels, and would most likely lead to a stop in EU funding for the country, which has fueled Polish economic growth since its accession.
The threat of financial penalties was sufficient last month for the Polish government to disband the controversial disciplinary chamber for the country’s judges, a body which the ECJ found to be illegal. Even though the Polish Constitutional Court ruled the government should ignore a previous demand to scrap the chamber, Warsaw decided not to risk losing the funding, and announced it would disband the body.