Tony Abbott board of trade appointment raises concern in Australia 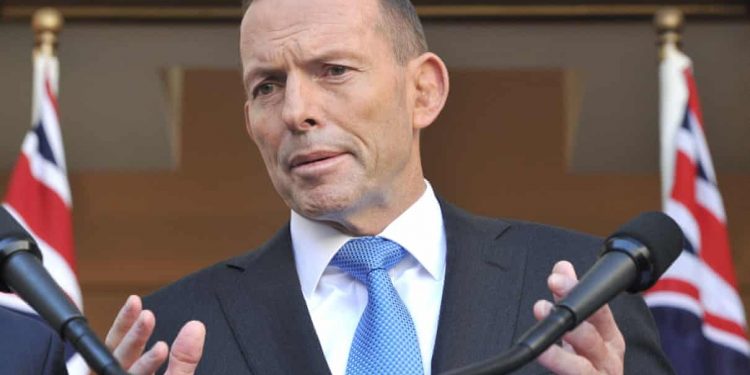 The former Australian prime minister, Tony Abbott, has been accused of a conflict of interest after he accepted a post as a trade adviser to the UK government, amid continuing criticism of his appointment.

Several fellow members of the board of trade of which Abbott will be a member signalled unease over his inclusion. It comes after remarks that have led to his being accused of sexism and homophobia.

Political figures in Australia have now raised concerns over his appointment as an adviser to the UK as it seeks post-Brexit trade deals around the world. One Australian senator even suggested he should be forced to register as a foreign agent. Opposition and Tory MPs were among those to express public concerns when Abbott’s appointment was confirmed by the Department for International Trade on Friday. His period in office included opposition to climate emergency measures, opposition to gay marriage and controversial immigration plans.

He has also been criticised for describing abortion as “the easy way out” and suggesting that men were better equipped for leadership roles than women. He was also attacked by then-Australian PM Julia Gillard for the views he had expressed.

The entrepreneur Anne Boden, a fellow member of the newly appointed board of trade, tweeted that it was “important that we have challenging voices”. However, she also said she supported “diversity and so did this woman”, linking to a video of Gillard’s 2012 speech accusing Abbott of misogyny.

His appointment has now caused debate in Australia over a potential conflict of interest. Mark Dreyfus, the shadow attorney general in Australia’s Labor party, said the Australian government should explain “how a former Liberal PM can now work for a foreign power advising on matters potentially in direct conflict with Australia’s commercial interest … and how conflicts arising from Mr Abbott’s intimate knowledge of Australia’s trading interests and strategies, gained during his years as minister and prime minister, will be managed.”

Other Australian parliamentarians went further. Rex Patrick, an independent senator from South Australia, labelled Abbott’s appointment a “disgrace” and called for the former prime minister to be forced to register as a foreign agent under Australia’s foreign influence transparency scheme. He said Abbott should be stripped of “most” of his travel and office allowance. “Australian taxpayers shouldn’t subsidise a foreign agent,” he said.

However, Australia’s attorney general Christian Porter, congratulated Abbott. “Mr Abbott will no doubt be aware of the routine requirements for former cabinet ministers under the foreign influence transparency scheme,” he said. “In the first instance, it is up to each individual to determine whether or not their circumstances meet the registration requirements.”

In a statement released on Friday, Abbott said he was “only too keen” to help the UK. “A UK-Australia trade deal, maximising the movement of goods, services and people, is clearly in the best interests of both our countries,” he said. “My government finalised trade deals between Australia and China, Japan and Korea. I’m looking forward to bringing that expertise to bear as Britain works towards mutually beneficial improvements with its major trading partners.”

Boris Johnson has defended the appointment, which is an unpaid position. “I obviously don’t agree with those sentiments at all but then I don’t agree with everyone who serves the government,” he said on Friday. “What I would say about Tony Abbott is this is a guy who was elected by the great liberal democratic nation of Australia.”

However, shadow trade secretary Emily Thornberry criticised the move. “He’s never been involved in detailed trade negotiations, he thinks that issues like climate change and workers’ rights are just not important, and during the two years that he was prime minister of Australia he was personally responsible for killing off Australia’s car industry,” she told Times Radio.