Tomáš Petříček: A Czech President should stand by a Czech government 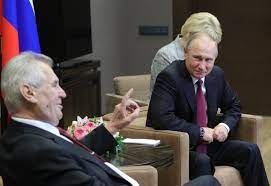 Prague (Brussels Morning) It is often the case that an interview with a former foreign minister can yield more than an encounter with a serving representative of his country. On the sidelines of the Prague European Summit (July 12-14), Brussels Morning sat down with Tomáš Petříček, a pro-European Social Democrat who was dismissed after losing a bid to lead his own party.

Taking the lead in his dismissal was President Milos Zeman and his rival in the bid for the leadership of the Czech Social Democrats, Interior Minister Jan Hamáček. The fact that the call for his resignation came from his party made it politically incontestable.

The trigger for his dismissal was probably that he articulated an opposition to the rollout of the Russian Sputnik V vaccine before its approval from the European Medicines Agency (EMA). In expressing this scepticism, he echoed former Health Minister Jan Blatný, who was also fired. This brought to the fore a divide with President Zeman, who has time and again articulated views favourable to Moscow and articulates sceptical-to-Brussels views.

But a contributing factor to his dismissal may have been his suggestion that the Czech Social Democrats should sever their political ties with ANO, the party of Prime Minister Andrej Babis. For the moment, the Social Democrats in the Czech Republic are not polling well and were the country to go to the polls before October, that could prove detrimental.

We meet Mr Petříček for a discussion on foreign policy, but also on domestic politics, to the extent that they have a bearing on EU politics: the Visegrad Group, Euroscepticism, Russia, and populism.

Brussels Morning: For a brief period, there was speculation that an alignment between Visegrad and Weimar countries could become the new engine of the project of European Integration, perhaps an event replacing the primacy of the Franco-German relationship, reflecting a shifting geography in Europe after the big bang expansion of 2004. Today, the Visegrad is often vilified by the European press. What changed: Visegrad countries or the European Union?

The Czech Republic looks for partners beyond Visegrad. But Visegrad has been demonised largely because of migration. That is not fair because this view of Visegrad does not recognise the legitimacy of diverging member state worldviews.

True, states in the region (including) the Czech Republic have been accused of being resistant to accepting migrants. While it is true that we don’t have external Schengen borders, the Czech Republic is a country of 10.4 million inhabitants of whom 600,000 are foreign-born: from the Caucasus to Ukraine and Central Asia. We favour a rules-based migration regime.

The Czech Republic favours now, as always, regional cooperation. Besides Visegrad, Chechia also engages with the Austerlicht format, with Slovakia and Austria. There is a broad acceptance for the need for regional interest-based cooperation across Europe, from the Benelux to the so-called neuvo-Hanseatic League. Our regional perceptions adjust to the changing of times: for instance, China is an emerging player both in the region and in Europe. We have little choice but to respond en bloc as well as together, as EU member states.

Brussels Morning: How do you see the emerging power balance in Europe that is emerging through these regional formats?

I see the glass as half full.

The big bang enlargement worked and strengthened the EU. But at the same time, it brought new challenges. We have more gaps, deeper gaps, between social groups as well as between countries.

At times, some of them require region-specific answers. Different countries with different histories have come into the EU, often undermining public perception of cohesion. There, too, regional responses make sense.

But in Europe and regionally, we should become more open about the need to talk politics. its time for normal politics, being responsive to public discourse.

Brussels Morning: This year the Czech GDP overtook that of Spain. In your view, would membership of the Euro cement this trajectory or derail it?

I don’t believe that economic convergence has something to do with the Euro.

The Czech Republic is an open economy – one of the most industrialised in the union – and positioned in the heart of Europe, linked to its industrial heartland: north Italy, Germany, Benelux. We have been capable in integrating and now we are climbing the value-added ladder.

But I remain cautious about our understanding of convergence: GDP is just a figure. It tells you little about the standard of living and real income. Every salary in the Czech Republic does not see a tangible reflection of this GDP growth. And that is why many people in Central Eastern Europe feel dissatisfaction. Inequality has risen within our societies. And that breeds dissatisfaction and populism.

Populism is thriving because the big picture looks good everywhere, but the increasing social gap is widening and deepening and people feel betrayed by the EU project on a personal level. They don’t live better than their parents.

Don’t take me wrong, the quality of life in the Czech Republic is great, but we face significant challenges.

Brussels Morning: The Czech Republic has a very different kind of social democracy to Slovakia, Poland, and perhaps Hungary. Your own political trajectory is linked with an ambition to be part of a more progressive proposal for the Czech Republic and Social Democracy. How does your vision fit the context of Visegrad politics?

There is a relevant historical context here. The Czech Social Democratic Party was founded in 1878 and is the only non-communist successor party, with a very long tradition. It is not a reform-communist party.

In Czechia you still have the Communist Party and Social Democracy.

From the outset this had certain implications for what we stand for.

The party was renewed in 1990 as a center left party. Our natural “counterparts in Europe” where the SPD in Germany and the SPE in Austria, with whom we share a common history. But as all parties in the region, we face a huge crisis: on the one hand the rise of populism; on the other hand, the rise of liberal centre parties that attract part of the progressive electorate.

Brussels Morning: And what about the crisis of traditional institutions linked to social democracy, like unions?

Social Democratic Parties elsewhere are successful, where the class structure has changed: Finland, Portugal, Spain, Sweden. There too you have populists but Social Democrats have succeeded. These are parties that are still bringing clear rational solutions and do not endorse nationalism and populism, as parties elsewhere do, including Euro-scepticism.

In our region, the left is divided between conservative and progressive left. Which, rather than balancing, polarises before the vote along the lines of nationalism and populism.

I wanted to make clear that we needed a new alliance after the election. That cooperation with Andrej Babis is not feasible in terms of political values and priorities.

We should, at the same time, widen our agenda to introduce to emerging political challenges: the New Economy and the labour market, green Issues, etc. Social Democracy should not be there to conserve achievements of the past but prepare for the changes that will inevitably come. We need to proactively develop economic policy, education, and strengthen social cohesion and employment.

Brussels Morning. Going back on how you view Europe and its “framing.” What is your view on enlargement? Are you in favour, for instance, of expanding the Union to include East Partnership states.

I am in favour of enlargement. It is a traditional priority of our foreign policy, particularly towards the Western Balkans. The EU should be open to any country with a credible aspiration and can meet all the conditions.

But we need to be honest. Countries of the East partnership do not have equal chances. And those that are willing have a lot to do at home: from rule of law to reforming their judiciary and their economy.

We also need to be politically realistic. The internal atmosphere in the Union is not favourable to enlargement. People would prefer that we fix our own problems first. These are not necessarily geopolitical.

Brussels Morning: Trying to combine foreign and domestic policy; Mr Hamacek cancelled a trip to Moscow following a diplomatic escalation that followed the alleged involvement of GRU security agents in the explosions at the Vrbětice ammo depot. Would you approach the crisis differently?

I would separate the diplomatic reaction from the way the case was communicated to our partners and public opinion.

The diplomatic reaction was appropriate and correct. There was nothing else the government could do after such revelations. But I would try to better prepare our partners so as not to surprise our partners.

I was not privy to the discussion before the announcement. Our partners, it seems, were surprised. And that was possibly predictable. I don’t think they should have read our reaction in the press.

Jan Hamacek did nothing wrong. But the conduct of the President was shocking. He was the one to question the investigation and I would expect the head of state to support the government’s position in such a delicate context.

Brussels Morning: The current Czech government is facing a conflict-of-interest crisis that has attracted the interest of the European Anti-Fraud Office (Olaf). Politically speaking, do you feel we need to let justice run its course or is there a need for more bold action to restore public confidence in institutions? Does anyone care?

It is another issue that goes along already polariSed lines.

You have supporters of Babis that believe that Olaf is politically motivated. And for them, it is not a decisive issue. But there are people who strongly disagree and are afraid that this affects the public image of the country. And it is not good for the country when the PM faces such charges.

A third way, I would suggest, is to INVOLVE relevant institutions. If Olaf comes to the conclusion that the economic interests of the EU have been harmed, then we have to respect this conclusion.

Perception is politicised. The process is the process. Let it work. Rule of Law applies to everybody. If they find someone is guilty, we should respect that.

You must also understand that such cases politicising an investigation can backfire: this only galvanises political support for those under investigation. There are precedents: Berlusconi, Trump… you name it.