‘To my last breath’: survivors fight for memory of Hiroshima and Nagasaki 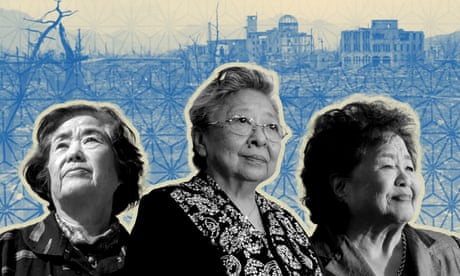 As they mark 75 years since their cities were destroyed in an instant, the ageing men and women who bore witness to the atomic bombings of Hiroshima and Nagasaki are struggling to remind the world of the horror of nuclear weapons.

An estimated 80,000 of the city’s 350,000 people were killed instantly; by the end of the year, the death toll would rise to 140,000 as survivors succumbed to injuries or illnesses connected to their exposure to radiation.

Ogura, who was playing outside her home when the force of the blast swept her off her feet and knocked her unconscious, is one of a dwindling number of survivors who have made it their life’s work to tell their story. They hope, with increasing desperation, for a world without nuclear weapons.

“My father had said that something didn’t feel right that morning and told me not to go to school,” she said. The blast ripped the roof off the house she shared with her parents and two brothers, and destroyed much of the interior. But they had survived. “It was dark and there was absolute silence. I didn’t know what to do except crouch on the ground. All I could hear was the sound of my little brother crying.”

As evening fell, people who had been closer to the hypocentre a mile and a half away started arriving at their home. “They had badly burned faces and hair, and their skin was hanging off. They said nothing … they just moaned and asked for water.”

Ogura gave water she had fetched from a well to two people and watched in horror as they drank but then collapsed and died. “I didn’t know that it was dangerous to give water to people in their condition. For 10 years I blamed myself for their deaths.”

Ogura is one of an estimated 136,700 remaining hibakusha – survivors of the atomic bombings – from Hiroshima and Nagasaki, including those who were in the womb at the time of the attacks. With an average age of just over 83, many suffer from chronic illnesses linked to their exposure to radiation.

More than 300,000 survivors have died since the attacks, including 9,254 in the past year, according to the health ministry.

A recent survey by Kyodo news agency found that more than three-quarters of survivors were “struggling” to pass on their experiences, with many citing their advanced age. Only a fifth said they planned to continue sharing their stories.

Those like Ogura who have spent years talking to audiences in Japan and overseas, are frustrated by the lack of progress on nuclear disarmament, and fearful of a future without hibakusha testimony.

“In the beginning, it was really painful to remember those days,” said Ogura, who did not speak publicly about her experience for 40 years. “But I wanted young Americans to know what their country had done. I’m not blaming them for what happened, I just want them to know the facts, and think.”

Although he was only five at the time, Sueichi Kido recalls hearing the engine of the Bockscar, the American B-29 bomber that dropped a plutonium bomb on Nagasaki on 9 August, killing 74,000 people. “I remember someone saying that it didn’t sound like a Japanese plane … then there was a flash and a boom,” he told the Guardian.

“There are things I remember very clearly about that morning and things I have no recollection of,” said Kido, a retired college teacher who, at 80, still serves as secretary general of Nihon Hidankyo, an organisation that represents survivors of both atomic bombings.

He was standing in front of his house a mile and a quarter from the hypocentre when the blast sent him flying through the air. His mother, who was standing nearby, was badly burned on her face and chest. “There was nothing left of our neighbourhood,” he said. “Everywhere was black. I remember seeing charred bodies floating in the river.”

Six days later, Kido, his seven siblings and their parents sat around a wireless listening, for the first time, to the voice of their wartime emperor, Hirohito. “We didn’t really understand what he was saying, only that Japan had lost the war.”

This weekend, he will make his annual pilgrimage to Nagasaki from his home in central Japan, where he has lived for the past 40 years. “There are not many of us left. Our time is coming to an end, and we all have to face up to that. But I will spend the rest of my life doing my best to make sure that I am part of the very last generation of hibakusha.”

Kido’s determination is shared by Ogura, whose battle against survivor guilt has now been replaced by one against time.

“People like me wondered why they had lived when so many others had died,” she said. “I could never forget the two people who died in front of my eyes. But I will keep talking about what happened until my last breath, so that they and the other victims did not die in vain.”