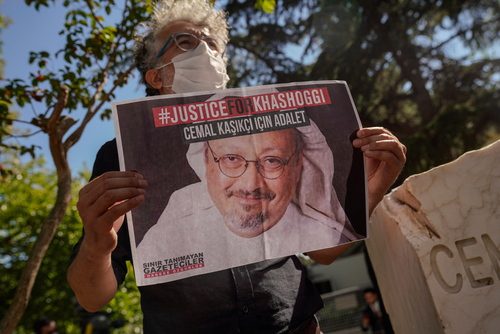 Paris (Brussels Morning) Calls for sanctioning Mohammed Bin Salman’s (MBS) assets and international engagements came from the UN, media and human rights NGOs following the publication of the intelligence report naming the Saudi Crown Prince as the man who ordered the assassination of dissident journalist Jamal Khashoggi in 2018.

The CIA had already concluded in 2018 with high confidence that the crown prince had ordered the killing, however, then President Trump refused to declassify the findings. The declassified intelligence report by the Office of the Director of National Intelligence (ODNI), echoed this position based on the “prince’s control of decision-making, direct involvement of a key adviser and his own protective detail, and his support for using violent measures to silence dissidents abroad, including Khashoggi”.

Secretary of State Anthony Blinken announced the “Khashoggi Ban”, a new visa restriction policy“ on individuals who, acting on behalf of a foreign government, are believed to have been directly engaged in serious, extraterritorial counter-dissident activities, including those that suppress, harass, surveil, threaten, or harm journalists, activists, or other persons perceived to be dissidents for their work”.

President Biden had promised to take a stricter stance towards Saudi Arabia to “pay the price and make them, in fact, the pariah that they are”, more specifically towards MBS as he stated his belief that Khashoggi was killed “at the order of the Crown Prince” and clarified his main interlocutor is King Salman and not MBS, leading some observers to allege that a soft “coup” was on the way to isolate and remove him from his post as heir apparent, in favor of more senior members of the royal family.

But the US administration stopped short of imposing similar sanctions to MBS as it did to others named in the same case. State Department spokesman Ned Price called the decision “not a rupture but a recalibration”. A sign of reluctance that is seen by critics as more of the same commercial calculations and strategic necessities. As the US seeks to limit the Saudi role in Yemen and bring Iran back to the nuclear negotiations, a minimisation of relations with the Saudi regime is currently considered crucial.

Calls for sanctions and a criminal investigation

However, the US stance has been the subject of tough criticism and calls for more tangible information of the report to be declassified in order to pursue MBS for his oppressive tactics and human rights violations.

Agnes Callamard, UN special rapporteur on summary executions who led the investigation into Khashoggi’s 2018 murder, reiterated her call for sanctions and an international criminal investigation targeting MBS, according to Reuters reporting. “It is extremely problematic, in my view, if not dangerous, to acknowledge someone’s culpability and then to tell that someone ‘but we won’t do anything, please proceed as if we have said nothing’,” she said during a Geneva news conference, adding that “to me [it] is an extremely dangerous move on the part of the USA”.

On 2 March, Human Rights Watch and another 41 organisations called on US President Joe Biden to impose sanctions available under the Global Magnitsky Human Rights Accountability Act on officials at the highest levels of Saudi leadership, including MBS.

Deploring the failure to honor the Biden campaign’s promises Fred Ryan, publisher of Washington Post where Khashoggi held a monthly column, wrote: “There is no legal, moral or logical reason to apply sanctions to the lower-level players in this conspiracy, who were following orders, while letting the criminal mastermind get away without consequence”.

“President Biden should now fulfill his promise to hold MBS accountable for this murder by, at minimum, imposing the same sanctions on him as those imposed on his underling culprits and ending the weapons transfers to Saudi Arabia that would be controlled by an unelected, brutal murderer”.

“If the crown prince is not punished, it will forever… endanger us all and be a stain on our humanity”, she added. “I urge everyone to put their hands on their hearts and campaign to punish the crown prince”.

“For too long, the House of Saud’s authoritarianism has been tolerated in exchange for cheap oil and arms sales. In an age of climate crisis and pandemic disease, this cynical bargain stinks”, read an Observer editorial, questioning how UK and US politicians continue to do business with him.

While the US and other western governments have refrained from imposing sanctions on the Saudi prince and the regime, lawsuits against him are pending in several countries, including the US, Canada and more recently Germany.

Democratic Representatives Ilhan Omar and Tom Malinowski have introduced separate bills calling for further sanctions and an effective travel ban to the US against MBS. DAWN organisation filed a lawsuit in late 2020 along with Hatice Cengiz, in addition to another two pending by the Open Society Justice Initiative, all with regards to the Khashoggi murder.

A trap ahead for Biden?

On the other hand, Biden’s reluctance may prove to have a boomerang effect. Karen Elliott House, senior fellow at Harvard Belfer Center and Pulitzer-winning journalist, spoke to the Saudi Gazette about the possible consequences both at home and in the Mideast. In the long-term, she maintains, Biden will have to deal with MBS, as “his ailing father King Salman, seems unlikely to survive the next four years”, thus rendering any sanctioning highly costly on the diplomatic front. Furthermore, more pressure to punish MBS could embolden his opponents but also lead to even more repression as the crown prince’s priority is his survival, she adds.

For its part, the regime has dismissed the report saying that it did not offer any firm evidence of the crown prince’s responsibility in the Khashoggi murder. “The report .. is based on could’ve, should’ve and would’ve and does not rise to anywhere close to proving the accusation beyond reasonable doubt,” Saudi ambassador to the UN Abdallah Al-Mouallimi tweeted, adding:

Messages of support to the work of the Saudi courts and justice system have also been issued by the governments of the UAE, Oman and Pakistan.