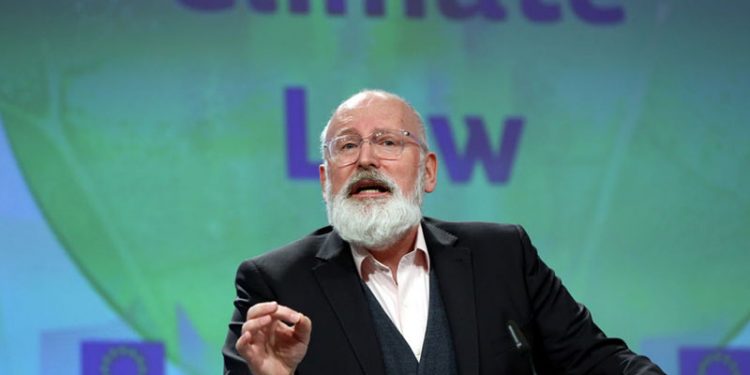 The European Commission Vice-President and Commissioner for Climate Change Frans Timmermans and Energy Commissioner Kadri Simson held a press conference today, unveiling the EU’s impact assessment on stepping up its climate control ambitions for 2030 and how it would meet its goals.

“We have to start mapping this out, now’’, Timmermans said, having declared that concrete proposals for an expanded Emissions Trading System to cover road transport and buildings and investment in “clean cars” affordable for all would be on the table by June 2021.

Yesterday’s State of the European Union (SOTEU) delivered by EC President Ursula von der Leyen made clear that there is no time to waste and that actions for climate change must speed up. One goal is a reduction of 55% in greenhouse gas emissions by 2030, part of the European Green Deal that seeks to attain climate neutrality by 2050. This transition required to achieve this is expected to involve society, government and industry in a concerted attempt to revamp habits and behaviours.

“Our impact assessment clearly shows that our economy and industry can manage this,” von der Leyen declared in the course of her State of the European Union (SOTEU) speech, noting that EU countries had succeeded already in reducing emissions by 25% since 1990 while the economy had grown by more than 60%.

However, German industry representatives remain unconvinced and told as much to Commissioner Timmermans when he attended the Federation of German Industries (BDI) climate conference in Berlin yesterday. BDI president Dieter Kempf spoke of how “the increase of the current target for 2030 by a further 15% would mean a roughly five-fold increase in the efforts of the 27 EU member states.” Kempf suggested that the target levels vary considerably within the EU, as they do also at global level.

The president of the German Association of Automotive Industries (VDA), Hildegard Müller, was also critical: “If we commit ourselves to our target for 2050, this means a 50% reduction in fleet limits by 2050, by which time around 60% of new cars sold in Germany would have to be electric,” Müller asserted.

On a different note, the World Economic Forum has announced that the CEO Action Group for the Green Deal has committed to help make Europe the greenest of the world’s economies, and has commended the EU’s ambitious targets as a basis for sustainable investments.

“The Green Deal is a once-in-a-generation effort to transform our economy. It is crucial to have European businesses on board, as we will need every company to contribute to climate neutrality and help deliver on the Green Deal. I very much support the efforts of the CEO Action Group to implement the European climate agenda,” EC Commissioner Timmermans said welcoming the endorsement.

EU climate change leader EC Commissioner Timmermans also discussed climate action during the 4th annual Austrian World Summit — managed by The Schwarzenegger Climate Initiative — which this year was held online. The summit is a climate initiative that brings world leaders together to discuss pressing environmental issues and climate change challenges with key stakeholders such as policymakers, corporate leaders, researchers, and the civil sector.