Throng of new penguin colonies in Antarctica spotted from space 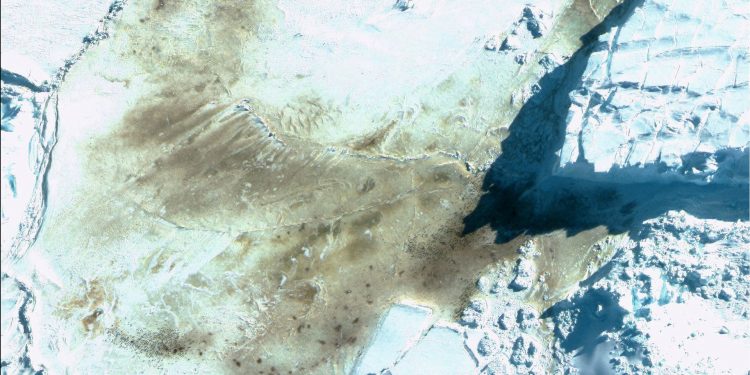 Satellite images have revealed 11 previously unknown emperor penguin colonies in Antarctica, boosting the number of known colonies of the imperilled birds by 20%.

The discoveries were made by spotting the distinctive red-brown guano patches the birds leave on the ice. The finds were made possible by higher-resolution images from a new satellite, as previous scans were unable to pick up smaller colonies.

Two of the colonies were a particular surprise. They were found far from the coast, living on sea ice that is anchored to grounded icebergs, a location never seen before.

The new colonies are thought to number a few hundred penguins each, which is smaller than average, so the discoveries increase the total population of emperor penguins by a smaller proportion of about 5-10%.

Emperor penguins are the only penguins that breed on sea ice, rather than land, making them especially vulnerable to the climate crisis. All the new colonies are in areas that are at risk and researchers say these will be the “canaries in the coal mine” as global heating increasingly affects Antarctica.

“The [new colonies] are an exciting discovery,” said Peter Fretwell, at the British Antarctic Survey (BAS), who led the research. “Whilst this is good news, the colonies are small and so only take the overall population count up to just over half a million penguins.”

Philip Trathan, also at BAS, said: “The new breeding sites are all in locations where recent model projections suggest emperor penguins will decline. These birds are therefore probably the canaries in the coalmine – we need to watch these sites carefully as climate change will affect this region.”

Fretwell said one of the colonies was 112 miles (180km) from the Antarctic continent: “Many of the penguin scientists we have talked to were disbelieving, as normally you expect them to be at the coast.” Emperor penguins need stable sea ice, usually attached to land, for nine months of the year to breed successfully.

There were only 30 colonies known a decade ago, as they are usually in remote and inaccessible locations, where temperatures can fall as low as -50C in winter. But then Landsat satellite images began to be used. These have a resolution of 30 metres, which is enough to spot the larger colonies.

The European Space Agency’s Sentinel-2 satellite was launched in June 2015 and has a resolution of 10 metres. This enabled a search for the smaller penguin colonies, as reported by the BAS scientists in the journal Remote Sensing in Ecology and Conservation.

Emperor penguins were expected to be present at fairly regular intervals around the coast of Antarctica, so the search was targeted in areas where none were known. “In every gap where we thought there might be a colony, we found one,” said Fretwell.

Three of the 11 colonies found had been suspected following ship or aeroplane sightings of penguins in the 1960s and 1980s, but Sentinel-2 images confirmed their presence. There are now 61 known emperor colonies around Antarctica. “There may be one or two very small colonies yet to be discovered, but I think we have filled in all the gaps now,” said Fretwell.

The next step is to direct satellites with very high, 30cm-resolution cameras over the colonies to enable the penguins to be counted. “It is dark at the moment in Antarctica, so we can’t count them yet,” said Fretwell. “The sun will come up either later this month or next month in most of these locations, and then we will start.”

Previous studies have estimated that 90% of known colonies will be lost by the end of the century if no further action is taken to cut the greenhouse gas emissions that drive global heating. Even in the best case scenario, where deep and fast cuts to carbon emissions limit the rise in global temperature to 1.5C, the population of emperor penguins is projected to fall by 30%.