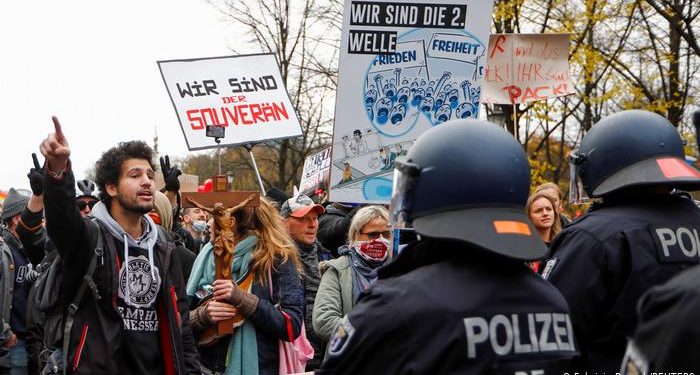 Brussels (Brussels Morning) Thousands of citizens took to the streets across the EU over the weekend, denouncing the latest measures to control the coronavirus pandemic as authoritarian.

On Saturday, protesters marched in France, Greece and Italy against mandatory vaccination and tightened restrictions, with as many as 160,000 people demonstrating in major cities in France alone, DW reported on Saturday.

The lower house of the French parliament passed new rules on Friday that would require a COVID-19 pass in order to access public spaces. The Senate is still debating the proposed legislation.

French authorities reported nine arrests after protesters clashed with police in Paris, where water cannons and tear gas were deployed against the marchers.

New COVID-19 cases have spiked in France in the past weeks and the government recently made vaccinations mandatory for health workers.

In Italy, thousands turned out in cities across the country to object to new regulations that will require a “Green Pass” to participate in public life from 6 August on. Protesters chanted “freedom!” and “down with the dictatorship”!

Prime Minister Mario Draghi defended the government’s plan on Friday. Insisting that “the Green Pass is not arbitrary’’, he said it was necessary in order to avoid shutting down the economy. “Without vaccination, everything will have to close again”, he warned.

Hundreds of protesters blocked the entrance to the Slovakian parliament in Bratislava on Friday. They threw eggs at the building while MPs were discussing rules to limit access to public life for people who have not been vaccinated against COVID-19, Reuters reported.

Slovakia has one of the lowest vaccination rates in the EU, having fully vaccinated roughly 34.9% of its citizens by Thursday.