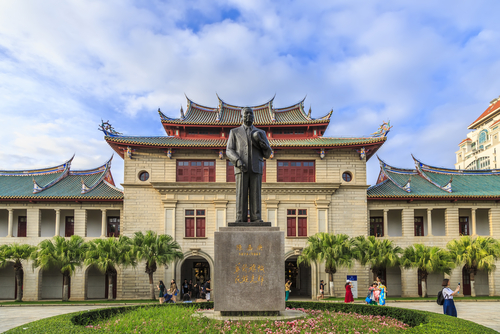 Xiamen, China - June 5, 2016: Xiamen University is one of China's most beautiful school.

Brussels (Brussels Morning) Some 10,000 Hungarians took to Budapest’s streets on Saturday in protest against the planned construction of an elite Chinese university campus in the capital, on a site previously designated for housing Hungarian students.

Prime Minister Viktor Orbán’s government reached an agreement with the Shanghai-based Fudan University in April to build a campus in Budapest. The first Chinese university to open in Europe would cost the Hungarian taxpayers some 1.5 billion euro, with most of the money coming in the form of a 1.3-billion euro loan from China, according to investigative journalism outlet Direkt36.

The campus would also be built entirely with Chinese labour and materials, providing no benefit to the Hungarian local economy. The government claims that the benefits of the university would come from thousands of Hungarian and international students profiting from world-class education.

Government critics emphasise that Orbán already evicted a world-class institution – the Central European University funded by George Soros – only to have it replaced with an educational institution which removed all references to “freedom of thought” from its charter in 2019.

“Fidesz is selling out wholesale the housing of Hungarian students, and their future, just so it can bring the elite university of China’s dictatorship into the country”, the organisers of Saturday’s protest wrote on the event’s Facebook page.

Budapest’s liberal Mayor Gergely Karacsony, a likely contender for the united opposition’s joint candidate for prime minister in the next parliamentary elections, has trolled the Chinese authorities by renaming the four Budapest streets surrounding the future campus site with  names that evoke and put the spotlight on Chinese human rights abuses.

Karacsony renamed one street “Uyghur Martyr’s Road”, referring to the mistreatment of the Muslim minority in the province of Xinjiang. Another street is named “Free Hong Kong Road”, in reference to the erosion of civil rights in the former British colony, now ruled by China. A third is named “Dalai Lama Road”, after the exiled spiritual leader of the Tibetan people, and the fourth is named after a persecuted Chinese Catholic leader, “Bishop Xie Shiguang Road”.