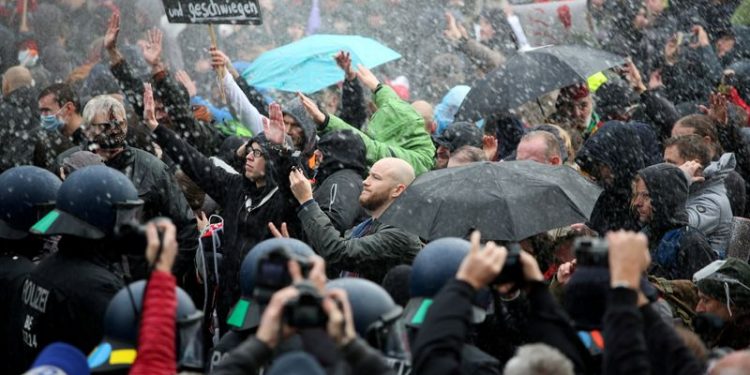 Brussels (Brussels Morning) Thousands of protesters marched on the German parliament in Berlin on Wednesday as the government passed regulations for enforcing coronavirus restrictions, DW reports. As demonstrators approached the parliament, police intervened, deploying pepper spray and water cannons in an attempt to disperse the crowd.

Approximately 190 protesters were arrested and nine police officers were injured in the clash between the two sides.

Minister of the Interior, Building and Community Horst Seehofer, commenting on the protest and the police reaction, commended the police for helping government bodies “to work without restrictions.” Thanks to the police, he asserted, the democratic constitutional state was alive.

The new regulations allow the government to legally limit social contact, the consumption of alcohol in public, to shut down stores and sporting and other events. Advocates of the move insist the measures are necessary to help the government address the coronavirus pandemic. On the other hand, critics warn that the new laws encroach on civil rights and give the government too much power. New rules were passed in the lower house with 415 MPs voting in favour, 236 against and 8 abstaining.

While demonstrators carried placards with slogans such as “for Enlightenment, peace and freedom” and “no forced vaccinations,” DW and Reuters report there were right- wing extremists in the march as well. Health Minister Jens Spahn promised there would be no forced vaccinations and pointed out that pandemic was a “once in a century phenomenon.”

Alternative for Germany (AfD) chief whip Bernd Baumann warned about similarities between the new laws and the Enabling Act of 1933 that helped to usher in Adolf Hitler’s National Socialist German Workers’ Party (NSDAP) dictatorship. Social Democratic Party of Germany (SPD) MP Helge Lindh stressed the importance of respecting the rights of protesters, but added that comparison with the Nazi regime was inappropriate.

The reason behind the new rules drawn up by Chancellor Angela Merkel’s government is to prevent any legal challenges to government-imposed restrictions.