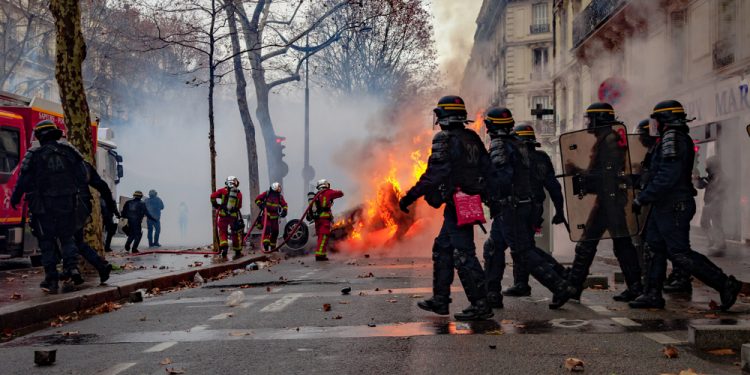 Paris, France: Firefighters extenguishing a car on fire during the Yellow Vests protest against Macron politic.

Brussels (Brussels Morning) Protests over France’s draft security law that would impose restrictions on the filming of police continue, with thousands of protesters in the French city streets on Saturday, RFI reports.

Critics warn that the bill makes it more difficult for citizens and journalists to record instances of police brutality.

While the bill was passed by the lower house of the parliament, President Emmanuel Macron’s ruling party, under mounting public pressure, announced it would amend the controversial Article 24, which regulates the filming of police. Left-wing protesters are demanding the bill be withdrawn completely, and reject the government’s plan to amend it.

Besides Paris, where demonstrations turned violent and police deployed water cannon to disperse small groups of rioters, protests took place in Lille, Lyon, Marseilles, Montpellier, Strasbourg and Toulouse. The police presence in Paris was heavier than usual in a bid to avert the violence that had marred earlier demonstrations.

Minister of the Interior Gérald Darmanin noted that the authorities had arrested 81 demonstrators in Paris by Saturday evening, among them, some who were “ultra-violent individuals.” More than 100 were arrested by Sunday after sporadic clashes with police, which noted that several ”black bloc” demonstrators were detained specifically to prevent them from stirring up violence.

The week before, small groups of rioters in Paris clashed with police, smashed shop windows and set vehicles alight. Human rights groups and journalists attending the protests, warned that the proposed regulations would limit press freedom. The violent clashes were largely blamed on black bloc rioters, so called because of their black clothing and face coverings.

Against the backdrop of recurring police brutality allegations, last week Macron proposed a summit in January to a police union, to discuss how to improve relations between police and the public. He insisted it was important to address these issues as well as police objections about their working conditions.

According to organisers, approximately 10,000 demonstrators gathered in Paris on Saturday, followed by Lyon with about 2,000 and Marseille, Montpellier, Toulouse and Strasbourg with roughly 1,000 each. Police deployed tear gas in Lyon and Lille to break up disorderly protesters.