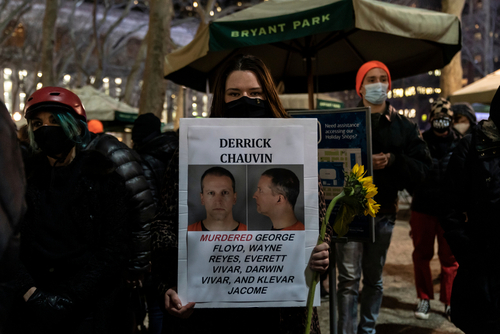 New York (Brussels Morning) This week, when the former police officer Derek Chauvin was found guilty on two charges of murder and one of manslaughter in the highly publicised murder trial, we saw that while the American legal system is not always fair or just, sometimes it works.

It was important to have this trial and this verdict, but anybody who is capable of watching a video on their phone or computer already knew that Chauvin murdered George Floyd, which triggered international protests last year. Basic powers of observation and perhaps a rudimentary knowledge of the English language is all one needs to recognise that reality.

It is also true that the American criminal justice system does not function by simply recognising reality but is instead based on rules concerning evidence, arguments and definitions that are somewhat more complex. While many Americans are grateful that this time the criminal justice system aligned with reality, that relief is tempered by the recognition that, in the bigger picture, the Chauvin verdict resolves nothing.

In 1992, massive and violent demonstrations in Los Angeles, and smaller ones in other cities, followed the acquittal of the police officers who assaulted Rodney King. Thirteen years before that the White Night riots in San Francisco included an assault on City Hall. Those demonstrations were the result of Dan White, the murderer of George Moscone and Harvey Milk, receiving a very light prison sentence.

This time, instead of violent demonstrations, the verdict was met, if not quite with joy or satisfaction, then with at least some solace. The concern that justice would not be served — and that somehow, once again, a police officer would face no major consequences for the killing of an African American — was so acute that millions of Americans were watching the trial with fear and anxiety, aware that another miscarriage of justice would lead to another round of demonstrations and potentially more police violence.

The fact that despite the evidence, including video, this fear was both strong and grounded in reality speaks to the psychic harm of so many years of racist police violence in America. No prison sentence for Derek Chauvin can change that, but at least in Minnesota in 2021, justice, in a very narrow sense, was served.

Seeing Chauvin get a long prison sentence may slake some abstract need for justice or even revenge, but it will accomplish little else. I will shed no tears if Chauvin spends the rest of his life behind bars, but I also know that will not bring Floyd, or any other African American who has been killed by police, back to life. Nor will one police officer facing consequences for his murderous actions, significantly change police behavior. It is also possible that the verdict in the Chauvin case will feed the “few bad apples” narrative upon which apologists for police violence, corruption and racism have relied for so long.

There is a troubling scenario where the guilty verdict in the Chauvin case could become fodder for opponents of police reform who can point to it as evidence both that police are held accountable for their actions and to suggest that advocates of police reform are radicals who can never be satisfied. However, suggesting that the Chauvin case proves anything about police accountability is nonsensical.

It is one extremely high-profile case that includes video of a police officer committing a cold-blooded murder. A more sober assessment of this trial is that based on what we know about police and the criminal justice system, if the murder had not been so unambiguous or if video did not exist, Chauvin would have likely been acquitted, and perhaps not brought to trial at all.

Accordingly, the Chauvin verdict will only be meaningful if it leads to further discussion and reform around policing. For that to occur, it is essential that the murder of George Floyd is still understood not as an isolated incident but as part of a pattern of police violence. The problem with the legalistic approach is that criminal trials necessarily focus on individual actions.

In fact, the decision by the prosecutors to focus on this case, and this man, rather than broader police conduct was essential for winning the trial, but only examining individual actions is, at best, an inadequate way to fix systemic problems. In the US, the court systems may sometimes function as a substitute for policy or politics, but as demonstrated in the trial of Chauvin, it is a very poor substitute.

By looking for justice from a legal system rather than solutions from a political system we all but ensure that the root problems will go unaddressed.