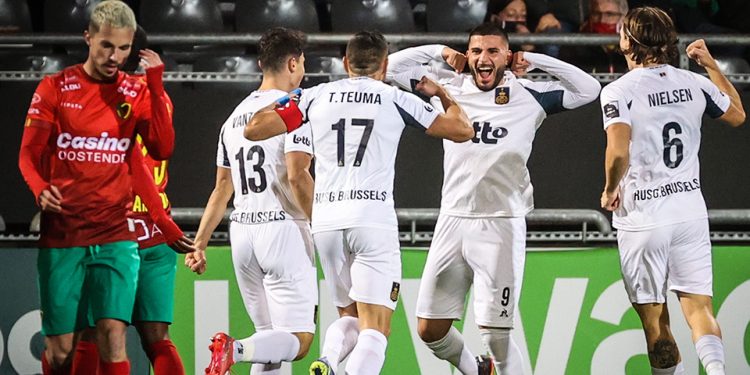 Brussels (Brussels Morning) In the standings, the Union is 7 points ahead of Antwerp, which hosts Ostend on Sunday evening, and FC Bruges, which goes to Genk on Sunday afternoon.

The Union Saint-Gilloise, leader of the championship, conceded its 4th defeat of the season in D1A, the first since the end of September, by losing 1-3 against Oud-Heverlee Louvain on Friday at Parc Duden at the opening of the 16th Jupiler Pro League day.

OHL won thanks to goals from Casper De Norre (13th), Mathieu Maertens (40th) and Xavier Mercier (67th), signing their first away victory of the season.

Despite this defeat, however, the Brussels club remains first with 34 points. OHL climbs to 13th position (20 points). The Union had not lost in the league since the defeat against Antwerp (1-2) on September 26 during the 9th day. The Brussels club followed with an 18/18.

If Felice Mazzù has made only one change to his team by preferring Jonas Bager to Ismaël Kandouss in defense, Marc Brys has cleaned up. After a poor performance against Seraing, Rafael Romo left his place in the goal to Runar Alex Runarsson. Mandela Keita, Pierre Yves Ngawa and Thibault Vlietinck were also dismissed in favor of Kristiyan Malinov, Sofian Chakla and Musa Tamari.

OHL launched a first spade to the Unionists. On the other hand, on a free kick from Mercier and an unfortunate slap from Unionist Loïc Lapoussin, the ball landed in the feet of De Norre, who opened the scoring in the 13th minute. The Union tried to raise the pace of its blocks but on a bad pass back from Damien Marcq, the ball reached Sory Kaba, who scored the second goal in the 40th minute.

At half-time, Mazzù took out Marcq for Mitoma. The Japanese did not miss his entry: on a pass from Teddy Teuma, he reduced the gap with a one-touch shot in the 51st minute. The Unionists then forced their opponents to curl up in front of their goal but on their first outing, the Louvanists took to the sea by Mercier (67th, 1-3). This goal from the French midfielder stunned the Brussels club, who were a little confused in their movements in the opposing zone.

In the standings, the Union is 7 points ahead of Antwerp, which hosts Ostend on Sunday evening, and FC Bruges, which goes to Genk on Sunday afternoon.