The Swamp: inside a revealing look into Washington corruption 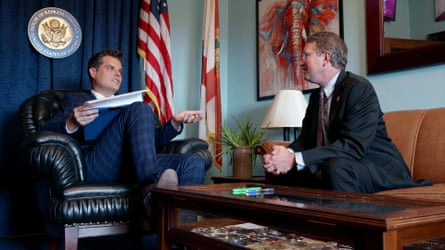 There’s a recurring graphic in The Swamp, a new HBO documentary riffing on the Trump campaign’s (false) promise to drain Washington of moneyed interests, in which vines overrun the Rotunda as it sinks into a gooey morass. The lure of corruption, and the entrenchment of money, is all-encompassing – a rare shared point between America’s two political parties, and a thesis of a film attempting to pull back the curtain on business as usual in Washington.

Directors Morgan Pehme and Daniel DiMauro were not strangers to corruption in American politics; the two directed the 2017 documentary Get Me Roger Stone, a film about the Trump campaign consultant who was sentenced to 40 months in prison for corruption charges (Trump commuted his sentence last month). But the two did not expect to find commonality on the issue of corruption in Congress in Drain the Swamp, a book invoking the Trump slogan by a co-founder of the House Freedom Caucus, Colorado representative Ken Buck.

The duo, self-described liberals, read the first seven or so chapters and were surprised to find themselves thinking, “we’re on the same page with this conservative member of the Freedom Caucus about how the rich donors and special interests are controlling and perverting our government,” Pehme told the Guardian. Then they got to the chapter on Buck’s argument for the end of the Endangered Species Act, and it was, “Oh, right, we’re not on the same page with you at all.”

Still, the near-overlap with progressive calls from the likes of Bernie Sanders and Elizabeth Warren to cleanse Washington of big-money donors seemed like a window into the deliberately opaque and confusing world of congressional fundraising. Filming Buck and two fellow Republican lawmakers – Thomas Massie of Kentucky and Matt Gaetz of Florida in their DC offices, at their homes, at campaign stops and constituent visits – could offer “a chance to take the American public behind closed doors in Congress for the first time and show them how the sausage is made”, said Pehme.

They began filming The Swamp in 2019 with an understanding of money’s corrosive role in representative democracy, especially in the near-decade since the Citizens United v FEC decision by the supreme court uncapped donations by large political groups known as Super Pacs. But the chokehold of money “was just so much worse than we could have imagined”, DiMauro told the Guardian. “Our objective was not to weasel our way into these Republican offices so that we could secretly undermine them,” said Pehme, a former political journalist. Rather, it was “to get the American people behind closed doors so they could see for themselves why the system is broken”.

The Swamp follows Massie, Buck and in particular Gaetz over the course of one turbulent year, as the lawmakers navigate a thicket of corrupting influences: the fundraising requirements by the National Republican Congressional Committee (and likewise by its Democratic counterpart, the DCCC) which incentivize endless campaigning; the party systems which attach a fundraising hierarchy to committee assignments – the more money raised, the more influential the seat; the necessity of media notoriety to win some independence from reliance of so-called Political Action Committee (Pac) money; the “threat value of money”, as explained by Harvard law professor and lone academic talking head Lawrence Lessig, that could be revoked in campaigns by corporations unhappy with legislation, which “has the effect of disciplining members of Congress”, especially on anti-industry issues such as fossil fuel regulation.

All three legislators decry, in public and on camera, the poisonous vines of financial incentives in Washington; all three also embody striking hypocrisies in staking their positions. Gaetz, the most notorious of the three for his friendship with Donald Trump, became the first Republican congressman to swear off Pac money in his campaigns in February, but derives much of visibility from his unwavering chumminess with a president whose administration tapped four times more lobbyists in two years than the Obama administration did in six.

Gaetz represents what DiMauro called “the double-edged sword” of visibility required to make swearing off business donations helpful in meeting fundraising quotas (for Gaetz, at one point, $125,000 for the NRCC) viable. He breaks free by trafficking in what Lessig calls “the politics of hate” – drumming up “bloodsport” conflict with the opposing party to drive emotions, and thus more fundraising.

“He’s able to create his own national platform by being so polarizing,” said DiMauro.

In October 2019, Gaetz corralled several Republican lawmakers into crashing a closed-door impeachment inquiry committee hearing in the Capitol basement as Laura Cooper, a top Pentagon official for Ukraine policy, prepared to testify. The scene, as captured by Pehme and DiMauro and a mass of news cameras, is chaotic and absurd – lawmakers hyped with game-time energy, wielding cellphones, accessing a secured room and then ordering pizza; the stunt violated confidentiality rules, jeopardized the security of proceedings and blared across cable news.

“The fact that it became such a big story shows how the media rewards the theater of the absurd,” said Pehme. “That was mission accomplished for Matt Gaetz, because he turned the story away from the depositions that were taking place in the Scif [sensitive compartmented information facility] to this false claim that the Republicans were being shut out of the process.”

The film, and its makers, are careful not to lay the blame exclusively at the feet of the Republican party; the Democrats have a similar system for allotting committee seats by fundraising levels, and require member dues (which were recently boycotted by Ocasio-Cortez, who instead promised to pay the money directly to Democrats in tough races). On the party level, “there is no interest in bridging the partisan divide, because they use it is as fuel for their money machines to keep themselves in power,” said Pehme. “But I do feel that there is an opportunity to bridge the divide between members of different parties.”

That’s partly why, said Pehme, the film focuses in particular on bipartisan support for ending America’s perpetual wars; it’s an admittedly surprising image to see Massie, a staunch fiscal conservative who denies human-produced carbon dioxide’s role in climate change (yet whose house runs entirely on solar power), standing in support behind Barbara Lee, the lone lawmaker to oppose the passage of the Authorization for Use of Military Force Against Terrorists act (AUMF) in 2001, which expanded executive power under Bush for the wars in Iraq and Afghanistan. Massie joined several Republicans opposed to America’s involvement in cyclical wars to support Lee’s proposal to repeal the AUMF.

The Swamp suggests, as the chaos of 2019 lurched into an unfathomable 2020, that special interests in Washington are not withering. Massie supported a war powers resolution restricting Trump’s ability to conduct military action in Iran – a vote in line with his conscience but not his Republican base – and laments his next 90 days “groveling” for campaign money to ward off a primary challenger. Gaetz swore off the Pac money – weeks before the coronavirus pandemic, which triggered a congressional stimulus bill that delivered billions to special interests at the expense of small businesses.

If it all seems bleak, the hope, said the film-makers, is change through translating common wisdom – Washington is dysfunctional, we all know that – into clear examples on screen. “If the American people get to see and understand exactly how Congress is corrupt,” Pehme said. “We can come together – Democrats, Republicans, independents – and we can insist that our members stop playing this game.”