The Sunset of the Gold Dawn and its political significance 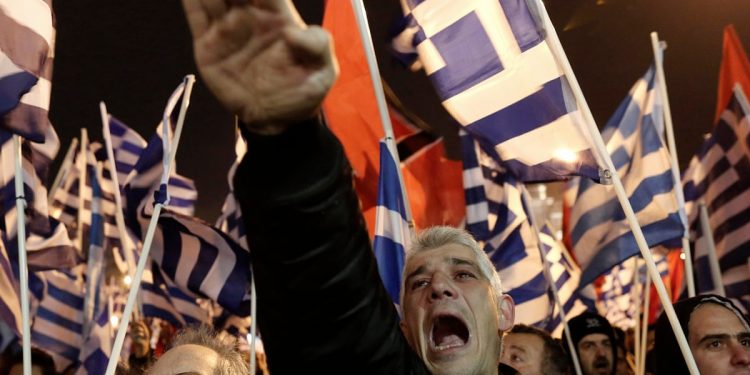 Thessaloniki (Brussels Morning) After a five-year-long judicial marathon, the Golden Dawn trial has reached a conclusion. A Greek court ruled that the party was in fact a criminal organization.

The court convicted the organisation’s entire leadership, finding them guilty of participating in a criminal organization, including overall leader Nikos Michaloliakos. In all, 68 defendants were found guilty, 18 of whom were former members of parliament and one an acting Member of the European Parliament.

Brussels Morning explores the political significance of the ruling for Greece, but also for Europe at large.

First ruling of its kind

Members of the party face convictions for assault, racketeering, attempted murder, and illegal possession of weapons. Golden Dawn members habitually attacked immigrants and their MEPs were known for threatening and bullying colleagues in Brussels.

One of them, Giannis Lagos, is evading arrest in Brussels.

The whole political spectrum in Greece has hailed the ruling as a victory for democracy over fascism, in what appears to be a new wave of reconciliation between left and right. The left in Greece has long accused the conservative right of pandering to the potential of securing the far-right vote and, on occasion, of not allowing the full force of the law to come down on those linked to paramilitary activity.

The right has accused the left of not putting its trust in the rule of law, yet supporting the passage of legislation that enabled the prosecution and conviction of Golden Dawn members not just on an individual basis but also the party as a whole.

Although political polarization remains heightened in Greece, the ruling seems to have allowed a semblance of normality, a much-needed endorsement of a political system that can still hold certain things to be “self-evident,” including the renunciation of racism and political violence.

That is no small achievement in these times. While a number of smaller, far-right groups have been labelled terrorist in the UK, far-right parties and groupings across the EU continue to challenge and  test the balance between freedom of speech and representation on the one hand and rule of law and individual rights on the other.

The landmark guilty verdict is the first conviction of its kind in Greece and one of the very few in Europe. Parties of the same political ethos have been making inroads across Europe, from Hungary and Spain to Sweden and the Netherlands. It appears no country is immune to the surge of the far-right.

The 2008 financial meltdown and the ensuing sovereign debt crisis in the Eurozone was an undeniable catalyst. It is worth recalling that at the height of Greece’s sovereign debt crisis, in the 2012 legislative elections, Golden Dawn’s electoral influence rose to 7% (440,000 votes).

For the first time since the collapse of the Colonels’ Regime, the far right was the nation’s third biggest party, holding 21 of the 300-seats in the Greek parliament. In 1980, Michaloliakos consciously founded a neo-Nazi organization , which remained largely ignored until hate-fuelled discourse became the norm in Greek politics.

Significantly and typical of far-right ideologues who often portray themselves as martyrs of a greater national cause, Golden Dawn consistently refused to accept responsibility for criminal acts members were convicted of in court.

Brussels Morning spoke to two MEPs, one German and one Greek, on the political significance of the ruling. The decision to feature two members of GUE/NGL stems from the fact that this political group was targeted specifically by the far-right.

Brussels Morning: How does the Golden Dawn phenomenon relate to the German Experience with the Far Right?

There are many similarities between the Golden Dawn phenomena in Greece and the far right in Germany in that they both have historical roots, and have grown significantly since the global financial crisis and eurozone crisis. I have direct and up-close monitoring experience of the Greek phenomenon. As the former chair of the Athens office of the Rosa Luxemburg Foundation, I was involved in working closely with Golden Dawn Watch.

The far right in Germany adheres to similar ideological creeds and pursues similar practices: targeting migrants, and those whose looks, views or language differs from their ideological worldview.

To me, the two most concerning aspects of the far right in Germany are its significant growth in recent years, and the movement’s infiltration into state bodies, particularly the armed forces and police. Public sources reported that far-right extremism rose sharply in 2019, with 32,080 extremists identified, up from 24,100 the year before. Most disconcerting is that 13,000 of these extremists were identified as prepared to use violence.

In June {2020}, the government announced the overhaul of Germany’s elite military special forces, the KSK, because of its links with neo-Nazis and far-right extremism, even disbanding one of its four battalions entirely. Every week there seem to be new revelations about far-right extremist {cells} organising in the military, police forces or secret services. I call for the democratic majority within the state bodies to expose any far-right extremists and to ban this behaviour.

Brussels Morning:  How do you distinguish between criminal groups, terrorist groups and political parties, particularly when the ideology in question legitimises political violence?

M.S.: In Germany, there is a spectrum of criminalisation of far-right groups and activities. It is a crime to engage in Holocaust denial or to use Nazi slogans or memorabilia at one end of the spectrum. Meanwhile, parties such as the AfD are careful enough to try to create an image of not being openly opposed to the country’s constitution on the other end. For a party to be banned in Germany, it must be found to aim to actively overcome – by militant means – the existing democratic order.

There have been a number of unsuccessful attempts to ban the fascist National Democratic Party (NPD).  The first attempt was rejected by the Federal Court in 2003 because the party had been so infiltrated by the secret service that the court found it was unclear whether actions had been carried out by party members or informants. The second attempt failed in 2017 when the court found the party was not significant enough of a threat to ban.

Brussels Morning: What is special about Golden Dawn, when we look at the phenomenon in its European context?

The case of Golden Dawn is unique to Europe, on multiple levels:

For the first time since the Nuremberg trials, we have a mass prosecution, trial and conviction of an organization with Nazi characteristics. It was not the members’ deplorable ideals that were tried, but their criminal actions.

The European Parliament is for the first time facing the {evolution of} a political party into a criminal organization, following the ruling of a member state court!

Both Yannis Lagos and the other Greek MEP elected on the criminal organization’s ticket have failed to associate themselves with any European Far-Right group in the Parliament, remaining isolated from even their closest political “cousins”.

These facts leave little room for afterthoughts and noncommittal compromises.

The European Parliament needs to swiftly and permanently eject from its ranks, not only the convicted Golden Dawn MEP, but also the second MEP elected on the ticket of a criminal organization, A. Konstantinou.

The criminal gang reserved preferential treatment for Konstantinou during the electoral process, placing him at the top of its ticket, which was supposed to be ordered alphabetically; Lagos was in fact second on the list.

Beyond the case of Lagos, who is convicted and his case is rather simple, we need to introduce institutional measures to preserve the democratic authority of the European Parliament. It is imperative to fortify the only EU body that is elected directly, and as such is the most democratically legitimate. We need to protect the house from criminal organizations like the Golden Dawn, who could simply replace their two MEPs with other members in their ranks.

It seems that the democratic political groups are moving towards this direction and I am optimistic that over the next period, the European Parliament will come to agree with the position that SYRIZA-Progressive Alliance and GUE/NGL have maintained since the beginning of this parliamentary term, namely to GET THE ΝΕΟNAZIS OUT OF THE EUROPEAN PARLIAMENT.