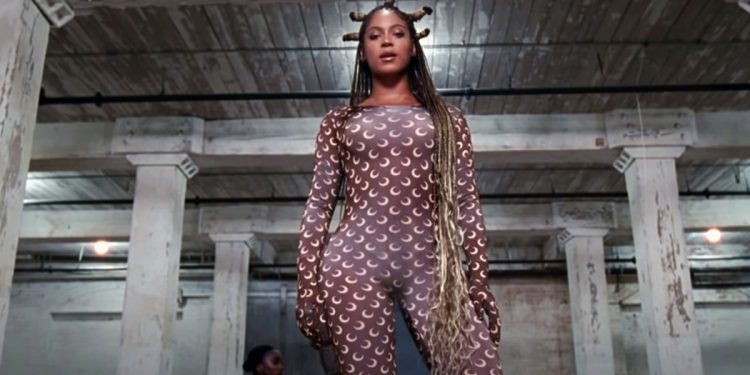 Thank you, Queen, for always making us feel so loved through your art,” Adele wrote on Instagram, kneeling under a still from Beyoncé’s Black is King. The film was released on Friday, and Adele, like a paid-up member of the Beyhive, was twinning with her idol in a Marine Serre crescent-moon top.

Versions of the same top, and a similarly adorned catsuit, have been seen on the most powerful women in entertainment this year including Lorde, Rosalia, Dua Lipa and Kylie Jenner. Since the weekend, there has been a 426% increase in searches for the brand, according to lyst.co.uk. In its ubiquity it has become the 2020 equivalent of 2016’s DHL T-shirt from subversive cult label Vetements: a high-fashion talking point in non-fashion circles.

The 27-year-old French fashion designer Serre – who got the Karl Lagerfeld seal of approval when he described her in one of his final interviews as having “a will of steel” – made the upside down crescent the logo of her eponymous label when it launched 2017 after she won the LVMH prize (fashion’s version of the Booker). Since her debut show in 2018 she has since put her distinctive motif on leggings, dresses, balaclavas and her Nike capsule, as well as tops and bodysuits.

The logo may only be three years old but it is in the lineage of Versace’s Medusa, Nike’s swoosh or Gucci’s Gs: simple, bold and hard to forget. “It harks back to the best logos, which essentially trade on being cult signifiers that you only know about if you’re in the know,” says British Vogue’s digital director, Ellie Pithers. It goes without saying that the shape is “Instagram-perfect”, too.

In Already, the segment of Black is King where Beyoncé is wearing the Marine Serre catsuit, she sings: “Be your own king / Make nobody come rule your world.” Its message of self-determination fits into the symbolic meaning of the crescent moon. A symbol of life and fecundity, the moon was also seen as a female deity, epitomised by goddesses such as Artemis and Diana, who was depicted with a crescent on her brow – it stands in symbolic contrast to the sun because it reflects light instead of producing its own.

“The moon for us is like an icon, an emblem, an image, a representation, a flag, a language, a metaphor, an object of what we believe in: crossing boundaries, hybridity and freedom,” Serre told Dazed and Confused. Its role in all things astrological, which is enjoying a renaissance, is also significant (almost 30% of Americans believe in astrology according to a Pew research poll).

“There’s a kind of ambiguity or a ‘fluidity’, as Marine told me when I interviewed her for Vogue,” says Pithers. “It’s wonderfully discreet but instantly recognisable at the same time, which is why I think it’s struck a chord.”

A trademark of Serre’s label has been her unwavering commitment to sustainability – upcycling makes up 50% of her collection. And the themes of environment and dystopia feed into her work. She described her autumn/winter 19 collection to Vogue as “after the apocalypse, a group of friends are underground – a community together. It’s a safe zone in which a new world is being created, a future world, a new way to see fashion.”

Beyoncé wore a black-and-red crescent-moon catsuit from this collection to the NBA play-offs last May. Like the Black is King one, it covered her hands, arms and legs – giving the impression of a second skin. In the context of pandemic dressing and social distancing, this look is eerily prescient. With this reference of “apocalypse chic” and the current climate of pandemic anxiety, the crescent moon catsuit feels chillingly appropriate.