The Russian military buildup has not stopped 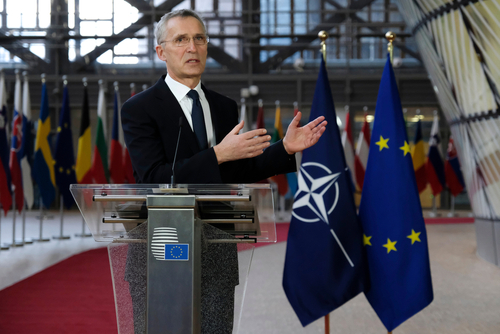 Brussels (BrusselsMorning) Jens Stoltenberg, after the NATO videoconference with their Allies, said that NATO would never withdraw its conditional offer to join Ukraine’s secure democratic policy.

NATO Secretary General in the press conference in Brussels said: “The Russian military buildup has not stopped. It is gradually building up with artillery and electronic warfare equipment.”

Stoltenberg mentioned that: “We are ready to engage in arms control with Russia, conventional and nuclear, but that has to be reciprocal,that’s a different thing imposing one-sided restrictions and we can’t end up in a situation where we have second-class NATO members where as an alliance is not allowed to protect them.”

We regret that despite the calls of the international community, over many weeks, Russia has not taken steps to de-escalate.

As well as threatening rhetoric, and a track record of using force against neighbors. The risk of conflict is real. Russia’s aggressive actions seriously undermine the security order in Europe. Said Jens Stoltenberg

US Secretary of State Antony Blinken accused Russia of “deceiving the world” by claiming that NATO and Ukraine threaten Moscow.

He added: “No one should be surprised if Russia instigates a provocation or incident then tries to use it to justify military intervention, and the world realizes the ruse it’ll be too late.” The guardian code

He said that the US and its allies could talk about “confidence-building measures, greater transparency, and risk reduction” with Russia.

However the NATO and E U meetings are scheduled for next week, to starting with Russia and the United States. On Wednesday 12 of Jan, NATO-Russia Council to discuss Ukraine, the will meet for the first time since 2019.

Jean-Yves Le Drian  French Foreign Affairs also said, that meeting will focus on preparations for the dialogue with Russia on European security also.

The Minister will underscore the importance of the dialogue resuming with Russia and the conditions and parameters based on which it may help strengthen strategic stability and security in Europe.

Stoltenberg also said about Kazakhstan that NATO Allies are following the situation in Kazakhstan very closely. We are concerned. We regret the loss of lives, it is important that violence ends and those human rights are respected, including the right of peaceful demonstration and freedom of expression. And many Allies and I’ve expressed this as the Secretary General of NATO.