The Rudy Giuliani investigation’s role in US foreign policy 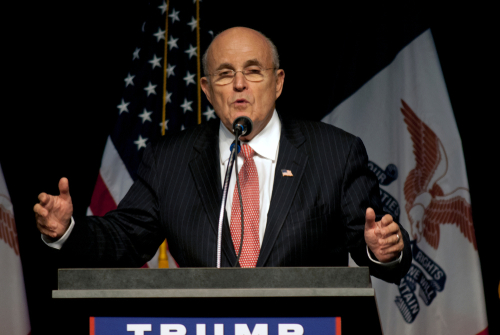 The investigation into Rudy Guilani is a lesson in reframing US foreign policy, writes Lincoln Mitchell.

New York (Brussels Morning) Rudy Giuliani, whose Manhattan apartment was searched by the FBI on 28 April as part of an official investigation, is the highest profile associate of former US president Donald Trump to find himself in legal trouble thus far. Apparently, the allegation against Giuliani is that he was paid by Ukrainian clients to persuade Trump to fire  Marie Yovanovich, the American ambassador to Ukraine, who Trump dismissed in May of 2019.

Yovanovich had served in the foreign service for many years and was broadly respected for her excellent work. However, in Ukraine her strong positions in support of that country in the face of Russian aggression, and her failure to go along with Trump’s hair-brained and corrupt scheme to pressure the Ukrainian government to investigate current US President Joe Biden, led to Trump firing her. Giuliani has denied all of these allegations while his former client, Trump, with his usual eloquence, has described the investigation of Giuliani as “like, so unfair”.

Giuliani’s journey from being a popular New York City mayor who was elected twice in that heavily Democratic city (full disclosure I voted against Giuliani both times), briefly ran for president as a kind of moderate Republican in 2008, to becoming one of the most visible faces of that element of Trump world that is most deeply disconnected from reality, has been alarming. Over the last few years, Giuliani ranting and fuming on various television programs and podcasts has been one of the most consistent parts of the MAGA landscape. He has devolved into a subject of mockery due to, among other things, his accidental call to a reporter on his cell phone and interesting hair dye choices.

The outcome of the case against Giuliani will take some time to resolve, but these recent events are a reminder that the web of corruption and scandal that engulfed the Trump administration was irredeemably intermingled with American foreign policy. Giuliani’s involvement in Ukraine, a subject which has never been fully explained to the American people, is an excellent illustration of the extent to which foreign policy, like everything else, was intensely personalised in the Trump era. During these years, Giuliani was never an official representative of the Department of Justice or the State Department. He was a private lawyer working for the president in Ukraine. That was a situation that was ethically untenable even if Giuliani was making a good faith effort to behave lawfully and ethically, something which we have no reason to believe.

Although Giuliani himself has devolved into a clownish figure, the impact of his clumsy actions in Ukraine may continue to harm that country and US-Ukraine relations. The policy impact of the firing of Yovanovich, in which Giuliani is accused of having a role, was to soften American support for Ukraine and American opposition to Russian meddling, in various ways, in Ukraine. Another subtext of the Trump administration’s Ukraine policy, one that was particularly perilous for Ukraine, was the surreal suggestion that it was Ukraine, not Russia, that intervened in the 2016 election, and that they did that to help Hillary Clinton.

None of this is new, and fully rehashing the Trump administration’s seedy approach to Ukraine, is not particularly fruitful, but it is nonetheless important not just that Americans understand what really happened in Ukraine, and the impact of the Trump administration’s policies there, but that the world, particularly Ukraine and other allies, know that we recognise the mistakes of the previous administration and will not look the other way when criminality is involved.

New administrations tend to often approach foreign policy failures of the previous administration with an attitude suggesting that the world will easily understand that the new administration should not be held responsible. However, other countries do not always view partisanship in America the same way Americans do and may see us all simply as Americans when it comes to foreign policy. For this reason, a visible break that includes, when lawful and necessary, criminal investigations, can send a powerful message to the rest of the world.
The Biden administration must reframe the US relationship with Russia, which under Putin has sought to weaken and undermine the US and its allies, as well as with Ukraine, a country that is still struggling against aggression from Moscow. Part of that reframing means signaling that we understand the reality of the Russia-Ukraine relationship and that the US understands that Moscow, not Kyiv, has intervened in domestic American politics and sought to destabilise the US. The investigation of the disgraced former New York City mayor, regardless of right wing paroxysms, is an important part of that.