The reconversion work of the former Fritz Toussaint barracks has started 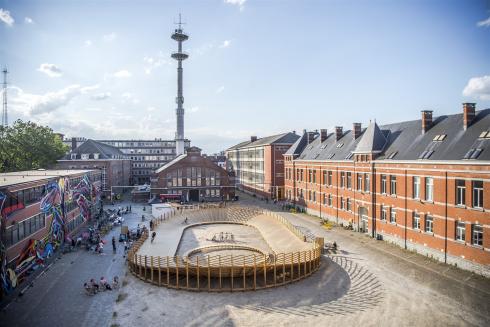 gendarmerie barracks in Ixelles have started their

Brussels (Brussels Morning) The old gendarmerie barracks in Ixelles have started their conversion. It will soon be an open, mixed and multifunctional district.

Seven Usquare.Brussels buildings will be renovated by the end of 2023. Six of them are located on Boulevard Général Jacques. They will accommodate university equipment and accommodation for researchers.

In all, 9000m² will be shared between the ULB and the VUB. In particular, they will contain the first institute for advanced studies in Belgium, which is intended to host international researchers in residence. The Center for Research in Urban Studies, Sustainability Sciences and Environmental Transformations will also take its place, as will the Maison d’Accueil International for participation between universities and the city. The old gendarmerie arena, in the middle of the site, will be the subject of a facades renovation, given its strong heritage value. This 1600 m² area will be reallocated into a hall focused on sustainable food.

Several projects on the site will follow and will transform Usquare.brussels. “Within a few years, Usquare.brussels will have become an open, mixed and dynamic, urban and friendly, university and international, sustainable and innovative district, for which the Region and the universities have set ambitious objectives, on the one hand, in terms of heritage development and, on the other hand, in terms of circular construction based on the reuse of materials.”, explains Rudi Vervoort, Minister-President of the Brussels-Capital Region.

All works should be completed by 2028 according to Gilles Delorge, director of the Société d’Aménagement Urbain (SAU). “After the renovation of the old arena, the SAU will pilot the operation of the food hall which will undoubtedly be one of the flagship elements of Usquare.brussels and a very useful shared facility for residents of neighboring districts.”