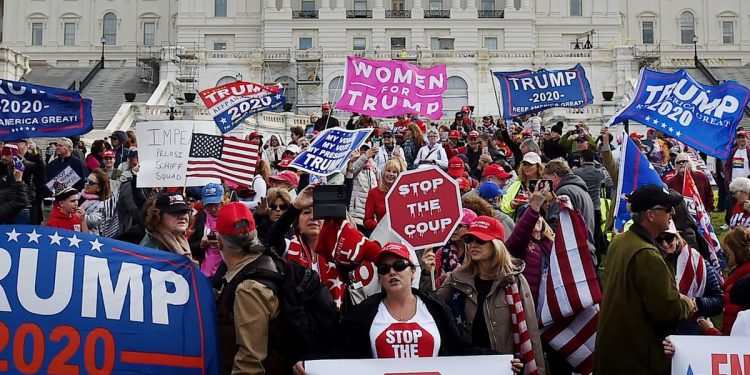 “Rather than ask how this election could destabilize the country, we should be asking how this can end with either candidate being sworn in as president with the other candidate standing gracefully in the background and the country broadly accepting the outcome and the process.”

New York (Brussels Morning) In fewer than 100 hours the polls will close, and the US will enter profoundly uncharted political waters. Once the voting ends, the states will begin counting the votes, Trump very likely will declare victory almost no matter what, legal challenges will begin to move forward, people supporting both candidates will go to the streets and the possibility of violence by security forces or far right militias and white supremacist groups will cast a shadow over all of this. Moreover, regardless of the outcome, a large proportion of the electorate will view the winner as illegitimate.

Given all this, it is not surprising that so many are pondering the question of whether or not the US will descend into a temporary, or perhaps more enduring, chaos, violence or instability. This question is daunting and, for many, frightening. It is also probably not the right question to ask. The more appropriate query is how the US can avoid descending into chaos, violence and instability. Rather than ask how this election could destabilize the country, we should be asking how this can end with either candidate being sworn in as president with the other candidate standing gracefully in the background and the country broadly accepting the outcome and the process. That scenario has seemed implausible for a long time, but now it is almost unimaginable.

There is, at first glance, a symmetry to American politics which is a tempting paradigm for understanding where we are and how we might be able to move forward. Both parties have fervent bases of support that believe that the other party is destroying America. Strong partisans on both sides live in closed media ecosystems and believe the news they read and hear is the real truth. Democrats believe that Donald Trump has been mired in corruption and scandal while Republicans believe the same thing about Barack Obama and Joe Biden.

This symmetry appeals to the media and punditry who want to project an air of seriousness and gravity. They speak of polarization as if it is a problem driven in equal parts by both major factions in American political life. The problem with this symmetry framework is not only that it does not hold up under real scrutiny, but that it overlooks the most important development in American politics over the course of the last few years, and in some respects much of this century – not the rise of polarization, but the descent of the Republican Party into a far right, white supremacist, conspiracy mongering, anti-science collection of cult-like followers of Donald Trump who now happily overlook, and at times celebrate, the criminality, cruelty, bigotry and avarice of his failed administration.

There is no equivalency between one party that seeks to ensure everybody has access to the franchise and another that spreads unfounded rumors about mail-in ballots being fraudulent while trying to make it more difficult for people of color to vote. Similarly, one party has advocated for wearing masks and taking widely accepted precautions against the Coronavirus while the other still does not seem to accept that the virus is real. One party advocates for treating people of all races equally, while the leader of the other party describes white supremacists as “very fine people” and urges violent white supremacist groups to “stand back and stand by.” With regards to media ecosystems, the New York Times and Fox News are, with regards to journalistic standards and reportage, simply not comparable. There is nothing any Democratic leader has done remotely similar to Trump’s relationship with Vladimir Putin. This is a very partial list, but makes it clear that any notion of equivalency is, from a moral perspective, absurd and ends up making it more difficult to confront the depravity of the today’s Republican Party.

Thus, the survival of American democracy requires political leaders and the American people to ratchet down the anger between Democrats and Republicans while simultaneously confronting the truth about what has become of the Republican Party. Failing to do that may not necessarily plunge America into chaos and disunity many fear, but it will not stop America’s no longer slow movement in that direction.

If Joe Biden wins the election and becomes president next January, there will be tremendous pressure on him to address this anger and disunity which threatens the country. Many will encourage him to make bipartisan gestures such as appointing Republicans to his cabinet or evincing a willingness to work across the aisle. While these kinds of things should be on the table, focusing on Joe Biden and the Democratic Party and asking them to be gracious, even generous, in victory, places the responsibility on the party that contributed much less to creating the problem. This may be the nature of politics, but unless Republicans do their share, the country cannot come together.

The problem is that for the Republican Party to meaningfully contribute to moving America back towards democracy and unity they would have to make dramatic steps such as disavowing and denouncing Donald Trump, breaking with Fox News and the rest of their misinformation and propaganda apparatus, telling extremely difficult truths to an angry base and other difficult, and unlikely, actions. The political reality is that the Republicans will do none of those things, but if they are defeated in November will likely become a rump Trumpist party and dig themselves further into their alternate racist, anti-scientific and conspiracy laden reality. It is not at all clear how America can survive that.