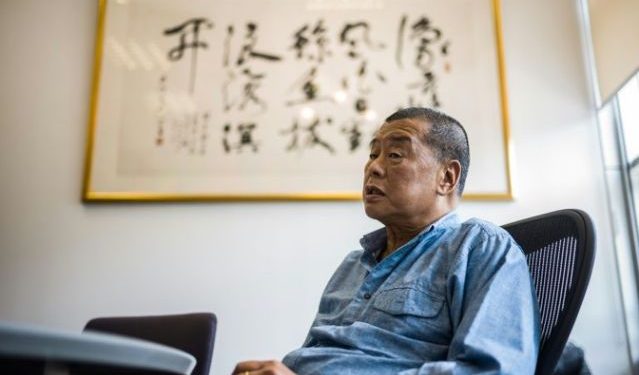 Wary but defiant, Jimmy Lai is determined to keep fighting for a democratic Hong Kong, even as he acknowledges that China’s goal is to take full control of the region.

Speaking to the Guardian five days after his arrest on foreign collusion allegations – he is currently out on bail – media tycoon Lai argues the press must keep going. But he also believes that Monday’s round up was a warning from Beijing.

Six weeks ago the Chinese Communist Party government (CCP) imposed national security laws on Hong Kong which made even the mildest forms of activism a crime against the state. Dozens have since been arrested, including Lai, who owns the unashamedly pro-democracy Apple Daily tabloid.

“They just want to show the teeth of the national security law, but they haven’t bitten yet. So let’s see what happens.”

Lai believes that he won’t be sent to the mainland for trial, and says his case will likely be a “litmus test” of Hong Kong’s legal system, and whether authorities will keep their promise that Hong Kong’s mini-constitution will be respected.

On Monday police officers came to Lai’s home shortly after his morning exercise. They let him shower, but kept the door open. Then he was handcuffed and taken into custody, and the police later walked him through the newsroom of Apple Daily, as officers rifled through reporters’ desks.

More than 40 hours later he was released on a hefty bail with no passport, court date, or details of his charges, beyond allegations of colluding with foreign or external forces and conspiracy to defraud.

Lai has met with US politicians including vice-president Mike Pence and secretary of state Mike Pompeo, and has called for sanctions in international interviews, which may be considered collusion if they occurred after 30 June. He has denied using US funds against Beijing, and opposes the push for Hong Kong independence which sits on the fringe of the pro-democracy movement. Nine others were also arrested.

Hong Kongers were furious, but the days of two million-strong marches and violent street clashes with police are over, so they got creative. On days when Apple Daily would usually shift 70,000 copies they sold half a million, according to reports. Businesses booked adverts and traders bought his company’s “junk” stock, surging its price.

The future of protest in Hong Kong is creativity and patience, according to Lai. “We won’t get what we want in a short time … We have to be more flexible and cautious and find different ways to persist for the long term, not the short term,” he says.

“Time is on our side, time is our weapon. Not violence.”

The international community has responded to Beijing’s crackdown by revoking extradition agreements, putting sanctions on Chinese and Hong Kong officials, and – in the UK – giving more than three million HongKongers with British National Overseas passports the right of abode.

“This has a tremendous positive effect in Hong Kong,” says Lai.

“Worse comes to worst, they can live in England where it’s a free country. So this will be a great intimidation to the CCP – if they push [Hong Kong] too hard everybody will leave.”

The cliche about Lai, who is also a British citizen, is that he is “Asia’s Rupert Murdoch” – rich, powerful, and passionate about the news. He is a prominent figure of the pro-democracy movement, unafraid to criticise Beijing.

He believes the eyes of the world are key to Hong Kong’s safety as long as they don’t look away. He isn’t sure if the hostile language of senior US officials like Mike Pompeo, will be useful in the long term, but says for now China seems to have dialled back its rhetoric.

“I think the more the US is involved in Asia, the better it is for everybody here to balance the CCP’s power.”

With the raid on Apple Daily, Hong Kong media’s fears became reality. They’d been told the press was still free as long as they don’t break the new law, but no one could say what that looks like.

He says he’s not asking his journalists to be martyrs.

“What I tell my staff is: when you do your job consider your own safety, your conscience, and your obligation to society.”

“We always have to test… the bottom line. So as we go on we might have a few arrests, we might get a few punishments, but life has to go on and the press has to go on.”

So what is the movement’s endgame? The promised full democracy they’ve been seeking for years is “impossible” now, says Lai, but they will keep fighting anyway.

“Without fighting, we don’t have hope. We don’t know when we’ll win, but we’re so sure we’re on the right side of history, and time is on our side,” he says.