The Politics of Wildfires in the East Med 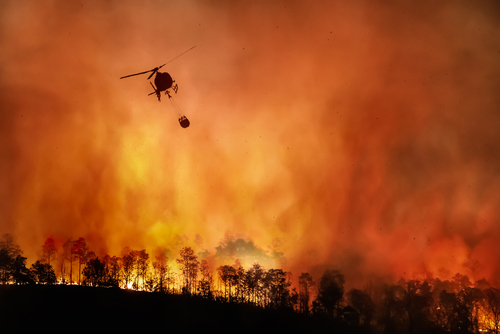 Athens (Brussels Morning). Wildfires cement bonds of solidarity between – and give rise to a louder blame game narrative across – countries of  the East Med.

Forested areas in the East Mediterranean have been ravaged by wildfires this summer, with Greece and Turkey dealing with high winds and temperatures in excess of 45C during July and August. Algeria, Italy, Spain, Portugal, and France have faced similar conditions, but did not all suffer the same consequences.

Solidarity has been the political high point of this period. As wildfires were burning through the pine forests of Evia, Athens, Crete, and the Southern Peloponnese, Greece received firefighting reinforcements from 24 nations across Europe and the Middle East. Nine planes, 1,000 firefighters, and 200 vehicles were mobilised by France, Cyprus, Sweden, Spain, Croatia, the Czech Republic, Serbia, Romania, and numerous others.

In Turkey not all assistance was welcome.

“Azerbaijan, Iran, Russia, Croatia, Spain and Ukraine assisted with aircrafts. France, Romania and Greece offered help, but it was declined due to technicalities. Turkey thanked all of them,” says Ms. Hazel Çağan Elbir, an analyst from the Center for Eurasian Studies (AVİM) in Ankara.

But while operations on the ground saw transnational cooperation, the political impact was very much nationally differentiated and ended up in a blame game that could have long term repercussions.

This summer was a litmus test for the ability of the EU to coordinate firefighting operations across the Balkans and the Meditteranean: Turkey, Italy, Greece, Albania and North Macedonia, via a support unit formed by France, Cyprus, Czechia and the Netherlands.

One of this summer’s takeaways was the need to develop a more centralised infrastructure for scenario-building and planning. The EU is now taking steps towards building and applying simulation models to predict the course and velocity of fires, as well as to improve on firefighting operational cooperation.

On July 16, the Commissioner for the Environment Virginijus Sinkevičius said the Commission would put forward proposals for “a binding EU framework for Forest Observation and Reporting, possibly backed with national or regional authorities developing Strategic Plans,” recognising the centrality of forest management for the protection of biodiveristy and achieving climate neutrality by 2030. The Commissioner pledged no less than three billion additional trees in Europe over the next decade.

While EU planning focuses on “lessons learned,” on a national level the blame game has been inevitable. Both President Recep Tayyip Erdogan and Prime Minister Kyriakos Mitsotakis were under attack on social media, facing accusations of incompetent management.

Turkey’s President Recept Tayyip Erdogan chose to point towards “enemies of the nation,” in what is seen as an attempt to deflect responsibility. Prime Minister Mitsotakis aknowledged shortcomings, created a firefighting ministerial portofolio, but also took measures to limit public discourse on fire. He declared it an issue of “national security,” limiting the ability of officials to engage with the press.

Erdogan’s senior foreign policy adviser Mesut Hakkı Caşın, accused Greece of being behind the fires in Turkey. His view does not echo the foreign policy consensus.

”Greece has been there for Turkey from the beginning. Minister Dendias stated to Minister Çavuşoğlu that whenever Turkey is in need, Greece will respond and that is the true spirit of the two nations. Throughout the crisis, both sides made their capacity available to their neighbour, despite the bilateral crisis in their relations,” says  Ms. Hazel Çağan Elbir.

For years, both countries have entertained conspiracy theories about arson as a weapon employed by all kinds of foreign agents, from the Americans to the Kurds, the Armenians, the Russians, the Albanians, the Pakistanis and, of course, the proverbial fifth columnist political opposition.

Things are about to get worse

Public opinion is now more consciously linking the wildfire phenomenon to climate change, which accelerates land dehydration and prolongs periods of high temperature, which in combination with the highly flammable pine tree forests place the whole region in danger.

In this scenario, climate change catalyses the phenomenon of wildfires, although a number of human-made factors are also relevant, including forest management. In that respect, political leaders seem to be making a step forward, while conspiracy theories appear a less convicing narrative.