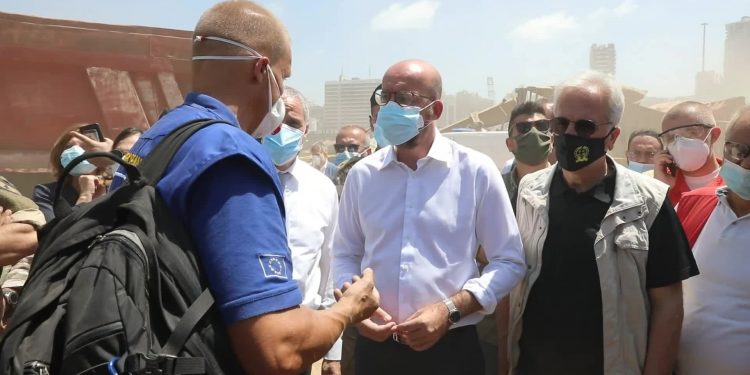 Charles Michel, President of the European Council, travelled to Beirut on 8 August 2020 to convey EU solidarity with the people in Lebanon after the devastating explosions on 4 August.

The President visited the Port of Beirut to witness the scale of the disaster. He called for an independent enquiry to shed light on the causes of this catastrophe and offered European expertise. During his visit, President Michel met with representatives of the Lebanese Red Cross and paid his respect to the rescue teams, including Europeans, working around the clock and showing tremendous courage.

President Michel repeated the EU readiness to continue the provision of urgent assistance to help the people in Lebanon. The EU has already activated its emergency mechanisms. It has mobilised EUR 33 million for emergency needs and more than 250 rescuers from European Member States are on the ground. Tons of emergency supplies have been made available and more will follow. Together with the President of the European Commission, President Michel urged all EU Member States to intensify their support to Lebanon both for the immediate needs and for the longer-term reconstruction. It is key that assistance reaches those who need it.

During his visit, the President of the European Council met with President Michel Aoun, Speaker of the Parliament Nabih Berri and President of the Council of Ministers Hassan Diab. The unity and stability of Lebanon are all the more crucial today, both internally, and also for the whole region. President Michel also underlined the importance of structural reforms in line with the government’s reform plan and Lebanon’s international commitments and as called by the Lebanese people. An agreement with the International Monetary Fund is urgently needed. He therefore called for concrete steps to reform the financial system and to adopt anti-corruption measures.