The next GOP false equivalency 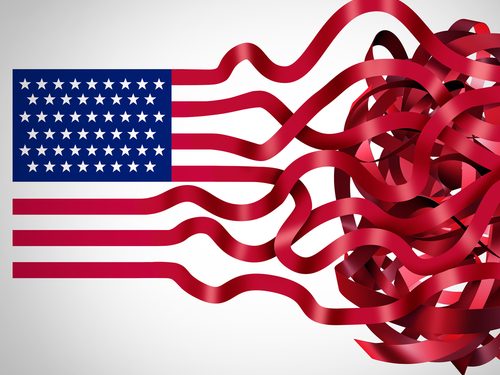 Government red tape concept and American bureaucracy symbol as an icon of the flag of the United States with the red stripes getting tangled in confusion as a metaphor for political inefficiency.

Comparing the far right of the Republican Party to the far left of the Democrats is a false equivalency, writes Lincoln Mitchell.

New York (Brussels Morning) False equivalencies are like oxygen to the alternate realities, fealty to Donald Trump and affinity for angry conspiracy theories that now define the Republican Party. According to the Republican worldview, the tiny minority of Black Lives Matter demonstrators who looted stores in the summer are the same as the insurrectionist thugs who stormed the Capitol and threatened the lives of, among others, the speaker of the House and the vice-president of the US.

Similarly, some Republicans would have us believe that people ignoring basic coronavirus related health protocols and contributing to the deaths of their fellow Americans are, the moral equivalent of African Americans struggling for their civil rights in the 1960s. Most absurdly, some believe that wealthy Americans confronting a few bad stories in the media are not much different that Jews during Hitler’s genocide.

This is particularly relevant now because the most prominent new Republican member of Congress is Marjorie Taylor Greene. Even by the standards of today’s GOP Greene stands out for her extreme views, belief in wacky conspiracy theories, hostility to the media and the political establishment and her sheer ignorance. She has been in Congress about a month and has already been stripped of her committee assignments by the Democratic majority.

Greene is also a woman and is known by a three-word name. By now you should see where I am going with this. That is right, it is only a matter of time before the far right and soon the Republican Party more generally begins to suggest that Marjorie Taylor Greene, MTG, and Alexandria Ocasio-Cortez, AOC, are both equally extreme and equally dangerous.

This position is abject nonsense, but it is much worse than that. Suggesting that MTG is simply the Republicans’ answer to AOC equates the latter’s left of center ideology with the former’s conspiracies and delusions. AOC’s views are to the left of many in her own party, but hardly out of the mainstream of American opinion. Support for increasing the minimum wage, investing heavily in combating climate change and dramatically increasing access to government funded healthcare are all views that are held by a substantial proportion of the American population.

If the Republicans succeed in creating a parallel between Greene and AOC, then their defense of Greene, that she is being silenced for her views, is much more relevant. On the specific issue, the Republicans have a point. A member of Congress, elected by the people of her district, should not have to answer for her opinions to the whole body, and particularly not to the other political party. However, Greene’s views are not what has led the Democrats to strip Greene of her committee posts and to encourage the Republicans to distance themselves from her.

The problem with Greene, and the reason Democrats want to see her censured, is not that her views are too right wing or even that she has some strange beliefs, but that there is evidence that she has encouraged violence of the kind we saw from the insurrectionists of 6 January to endanger the lives of fellow Congress members and Vice-President Pence. Perhaps in the murkiest depths of Q -Anon addled minds, AOC is guilty of something similar, but here in reality that is not the case.

Congress, particularly the House of Representatives, has always had a broad range of views represented. Members like Ron Dellums who represented a California district from the 1970s-1990s and Vito Marcantonio who served in congress in the 1930s and 1940s, and whose New York city district was very close to the district now represented by AOC, held progressive views that would fit in seamlessly with those of AOC.

Similarly, on the right there has long been an assortment of Libertarians, Christian Theocrats and segregationists in the House of Representatives as well. None of these people were censured or punished for their views alone, just as nobody is seeking to censure or suppress Marjorie Taylor Greene for her political opinions either but expect the Republicans and Greene herself to continue claiming that it is.

It is possible that the Republicans will not promote a false equivalency between MTG and AOC, but Greene is already emerging as what passes for a Republican media star in much the same way AOC did for the left two years ago. Regardless of the specifics, false equivalencies are an essential part of the Republican strategy because it deflects the media and, to a large extent, the electorate from having to confront the truth about their party-that the MTG’s, the Donald Trumps the Lauren Boeberts are not aberrations or ideological extremists but the very heart of a party that has abandoned its identity as a conservative party with some understanding of democracy to being a hotbed of extremism, conspiracy mongering and right wing violence.