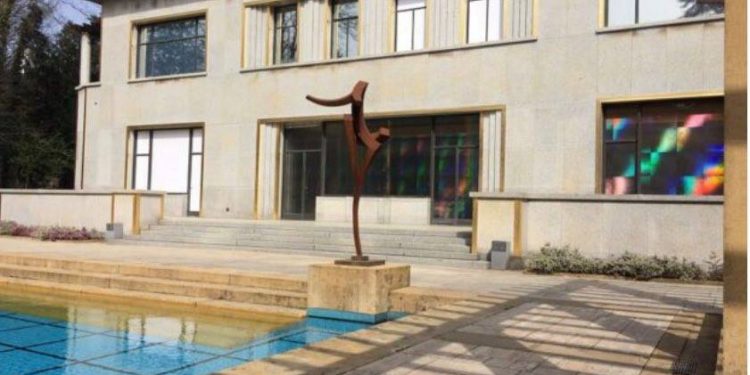 An exhibition at the Boghossian Stitching in Brussels reflecting on light and colour came to a close after a successful run, reviews Serena Pachianni.

Brussels (Brussels Morning) We do not know or remember what came before us, nor do we know what we will be there afterwards. From the moment we are born to the moment we die, our bodies are enveloped in light and, consequently, in the colour it develops and spreads. From atmospheric and astronomical light to mirrors, prism, neon and LEDs, the history of light has spanned almost 14 million years, starting from the violent outbursts of the Big Bang.

Since then, and especially with man’s appearance on Earth, research and studies have followed in an attempt to provide scientific, religious and neurological explanations for phenomena related to light sources. Then from the first representation of the law of refraction of light, which dates back to a 10th-century Persian mathematician, to the invention of glass lenses in the 13th century. And from Isaac Newton’s chromatic dissection of the prism to Thomas Young’s analysis of light interference phenomena and the very recent particle accelerator.

The psychological phenomenology of light in art

Particularly important are the ‘side notes’ on the effects of light and colour in art and artistic practice, both scientifically and emotionally oriented. According to Aristotle, material and immaterial colour came from the “charge of the soul”; Goethe traced the perception of colour back to a psychological phenomenon with a strong emotional component, opening the way to the perspectives of Klee and Kandinsky. Then, the research of the Impressionists, Pointillists and Divisionists placed the accent on the retinal persistence of colour, while the first observations on chromotherapy and the sedimentation of colour in the human psyche raged at the beginning of the 20th century.

With these fundamental premises, in the timeline that links the history of light and colour to human and artistic activity, the fascinating Villa Empain in Brussels that hosts the Boghossian Stitching becomes the ideal setting to welcome the exhibition The Light House. The exhibition invites the viewer to a contemporary experience of light through site-specific installations. In a highly personal interpretation, influenced by their respective cultures of origin, international artists were invited to modify the light spectrum of the house museum to offer a profoundly diverse yet complementary interpretation of light.

Mounir Fatmi, In the absence of evidence to the contrary (credit: Serena Pacchiani)

The path of light: towards overcoming obscurantism

The direct link with the monotheistic religion, which associates God to pure light radiation, is explored by artists such as Mounir Fatmi and his neon tubes reproducing the surahs of the Quran.

In the wake of the experiences of the 1960s, inaugurated by Dan Flavin, experimentation with neon is carried forward by Joseph Kosuth, Martial Raysse and Ivàn Navarro. This latter intervene plastically in the art deco spaces of the Villa Empain, inviting a new approach to modified reality and the conquest of physical and psychic space. Navarro’s optical effect of infinity, a sort of trompe-l’oeil made of neon, refers to the concept of the artist’s metaphysical fragility.

The most recent evolution of neon in art is achieved through LEDs, and Erwin Redl’s installation is a tangible example of this: through a virtual control system, architecture lends itself to a sensory reinterpretation through total immersion in a luminous environment.

The ‘classic’ manipulation of light through the prism is performed masterfully by the South Korean artist Kimsooja, who, through the effects of distortion and refraction, drastically modifies the visual perception of the marvellous bow window overlooking the villa’s swimming pool.

With light comes shadow and some of the exhibition’s artists have explored the latter in their research, highlighting the intrinsic and ancestral duality between darkness and light. Lebanese-Palestinian artist Mona Hatoum plays with shadows through rotating lanterns, which creates an effect of complete destabilisation to the spectator. In her installation, figures that appear projected on the wall are nothing more than silhouettes of armed soldiers, and the stars surrounding them are bombs in full deflagration.

The Hungarian artist El-Hassan brings out from the deepest shadows fruits and vegetables into which he has introduced a source of light, an essential element that refers to the intrinsic energy and necessity of nourishment for the human being. The path towards illumination is studded in the exhibition with other examples that fit with particular effectiveness and mimicry into the architectural spaces of the Boghossian Stitching, which is transformed, albeit temporarily, into a universal site-specific installation, towards the very essence that separates us from the darkness of obscurantism.

A version of this article in Italian can be found here.