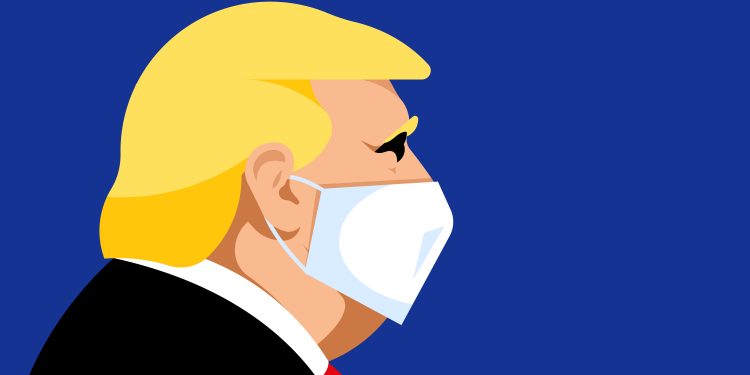 New York (Brussels Morning) One of the strangest moments of the 2020 presidential election was the first debate between then President Donald Trump and Democratic challenger Joe Biden. This debate occurred on 29 September, only about five weeks before the election. Biden was leading in most polls at the time, so Trump needed a very strong showing. Trump failed to achieve this or anything like it as his performance was, even by his own very low standards, exceptionally unhinged to the point of being manic, angry and rude. At the time, Trump’s message to the white supremacist group the Proud Boys to “stand back and stand by” was the most memorable moment of the debate.

Within days of that debate, we learned that Trump had tested positive for Covid and that he and several others in his debate entourage had refused to honour the Covid protocols that the debate organisers had requested. We are now learning, courtesy of a soon to be released memoir by Trump’s former Chief of Staff, Mark Meadows, that Trump knew he had Covid before the debate got underway. Meadows is a loyalist who was complicit in many of Trump’s authoritarian and corrupt excesses, so this news is not coming from an opponent of the disgraced former, and perhaps future, US president. The momentary online hysteria notwithstanding, nobody should be surprised by this piece of news. In the bigger picture, the key to understanding Donald Trump and the obscenity that has been his life in politics is never to be surprised and to know that his cruelty, bigotry and ignorance is unbounded.

Nonetheless, we now know that Trump knowingly exposed the likely next President of the United States to a deadly virus, one that, given Biden’s advanced age, could very well have been fatal for the Democratic candidate. It is not obvious what the legal term for that might be, but the immorality of the act is unmistakable. Again, we cannot be surprised by this.

Since Trump left office, and in some respects during the latter half of his presidency, new information about his despotic, craven and erratic behaviour has been treated as a kind of curiosity –a form of political voyeurism. It is as though these were just the latest antics of some third-tier cultural figure, someone who had stumbled onto rough times. That is, of course, precisely what Trump was before turning to politics.

An act of willful carelessness

The problem with this approach is that it fails to treat Trump’s actions with the gravitas they deserve. Trump’s lack of caution about the possible risk of spreading Covid is not just a curiosity. It comes perilously close to deliberately trying to kill people, certainly to an act of willful carelessness. His tantrums as January 6th approached were not just evidence of petulance on his part. They were genuine, if failed and clumsy efforts to destroy American democracy.

His famous phone call with the Ukrainian President, Volodymyr Zelensky, was not just Trump acting thuggishly, as might the leader of a criminal family, this was an American president seeking to further his own political interests by serving as water carrier for Russia’s President Vladimir Putin. In all these instances, the depravity of his misdeeds is overshadowed by the quirkiness of Trump’s behaviour; yet the people around him are too frequently lionized for revealing the details of things we generally knew about at the time, and which, in effect, they should have been held accountable for, given their months or years of complicity with Trump.

This phenomenon is particularly evident in Trump’s ghastly mishandling of the Covid-19 pandemic. Trump’s absurd Covid-related shenanigans ranging from his proposal that people inject themselves with bleach, suggestions that the pandemic would disappear “like a miracle,” to rabbiting on nonsensically about not wanting “the cure to be worse than the disease” were more than just bizarre. They led directly to the deaths of tens of thousands of Americans.

Trump’s behaviour during the Covid pandemic was nothing less than a deliberate effort to misinform the American people and, by so doing, helped accelerate the spread of the disease and increased the number of fatalities. That is the context in which the new information about when Trump likely knew that he had Covid should be treated and understood.

Restating the Covid crimes of Trump may be interesting from an historical or voyeuristic angle, but it is also important because that behaviour must not be relegated simply to the past. It is a chilling reminder of what lurks around the political corner should the GOP get back in power or even if it wins back control of one or both Houses of Congress in 2022. In the past few weeks, Jim Jordan, the fanatical Trump-supporting congressman from Ohio, has Tweeted that “real America is done with Covid”, while Republican Senator Ted Cruz of Texas took time off from his online fight with an eight-foot-tall, fictional bird (which by most measures he was losing) to verbally attack Dr.Anthony Fauci. This is evidence that Trump’s Covid policy — a hybrid of denial and ignorance — still reflects the views of the GOP.

Trump’s Covid policy coupled with the recent revelations about how he endangered the life of Joe Biden, are not just stories that demonstrate his erratic behaviour and tenuous grip on reality. They are a reminder of the very real danger Donald Trump represents in so many different ways. Even though the disgraced former president has always been a buffoonish figure for many, we must continue to approach him with all due caution and take him very seriously.