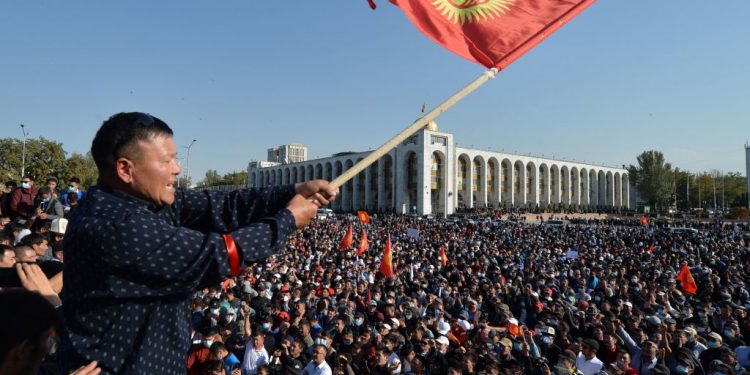 Washington (Brussels Morning) A mass civic movement overthrew the government in Kyrgyzstan this October, leading to the resignation of President, Soornobay Jeenbekov.

Jeenbekov succeeded President Almazbek Atambayev in 2017 and has since been linked to a series of “reforms” that have pushed back freedom of speech and association.

Following the 4 October elections, people took to the streets objecting to vote-rigging and registration fraud.

Of the 250 registered parties, only 16 contested the election seeking seats in the country’s 120-seat parliament. Of these, only four passed the seven per cent electoral threshold. The parties that fared best—Birimdik and Mekenim Kyrgyzstan— are both successors to the Social Democratic Party of Kyrgyzstan that has dominated politics for decades.

On 7 October, crowds occupied the “White House”, the seat of the government in the capital Bishkek, as well as the airport and the country’s mines. Subsequently, more than 1,200 people were killed or injured, until the President was forced to abdicate.

Jeenbekov is the third President to resign following similar upheavals in 2005 and 2010.

Ambassador Tedo Japaridze:  Kyrgyzstan is one of the most remittance-dependent countries in the region. To what extent is the current political crisis the result of a socio-economic crisis? Is there a reason to believe that the current situation could fuel Islamist movements?

Azim Azimov (AA). The origins of the current political crisis are deeply rooted in the socio-economic crisis triggered by the COVID-19 pandemic. Lockdown measures and limited healthcare access abroad, primarily Russia, forced Kyrgyz labour migrants to begin returning en mass since March 2020. The return fueled unemployment, which within just a couple of months climbed from 5% to 21%.

The sharp drop in income levels was made worse by the steep devaluation of the country’s national currency. The Kyrgyz som plummeted by 21% between March and early April.

The mismanagement of the healthcare crisis, as well as subsequent socio-economic failures have resulted in an unprecedented unpopularity of state authorities. A poll conducted by the International Republican Institute in August 2020 indicated that 53% of respondents thought Kyrgyzstan was on the wrong path in terms of development: this was a decade-high for this specific indicator. Also, for the first time in a decade, Kyrgyzstan’s President had the lowest approval rating among the political establishment.

These and other factors have created a favourable political environment for opposition forces that took part in the parliamentary elections on 4 October  2020. By law, parties contesting elections cannot be religion-based. Kyrgyzstan is a secular state whose constitution forbids participation of the religious organizations and figures in political affairs. Religion was hardly a factor in these elections. The “Ray of Faith” political party that is closely associated with Muslim activists and organizations received only a 3% share of the vote.

TJ. How is it that only parties loyal to the President managed to pass the 7% Kyrgyz electoral threshold? Are there signs of foul play in the electoral process?

Compared to previous election cycles, then-President Sooronbay Jeenbekov demonstrated noticeably less involvement in the election process. In the 2015 parliamentary elections and the 2017 Presidential elections the then-President Almazbek Atambaev blatantly used administrative resources to support his Social Democratic Party (SDPK). By way of contrast, Jeenbekov publicly distanced himself from any party affiliation, which in theory should have opened up political competition.

In reality, a party closely associated with {the former President’s} Jeenbekov’s brother, “Birimdik,” was once again able to use state resources to buy voted. Two more parties “Mekenim Kyrgyzstan” and “Kyrgyzstan” were also actively involved in vote-buying.

Even though political parties were subjected to far less pressure from the authorities than they used to be, loyalist and parties sponsored by oligarchs had a distinct advantage, since vote buying is widely practiced.

TJ. Kyrgyzstan proved quite unprepared to address the COVID-19 epidemic with the health system nearing meltdown during the summer. How is it that this broad failure was not reflected in the polls?

AA. With a population of 6.6 million, Kyrgyzstan declared first death from COVID-19 in March 2020 and has recorded around 1,200 deaths since.

The country’s healthcare system was overwhelmed by the first wave of COVID-19 and the parallel spread of pneumonia, eventually collapsing. As a result, people could not go to hospital to receive medical treatment or even receive advice by phone or online.

The way the authorities managed the pandemic was widely criticized. It was expected that pro-Presidential loyalist parties would receive no support in the elections. Counterintuitively, these parties did well, to the surprise of international observers. The single explanation here is vote buying that became the prime mover for political mobilization. For all the reasons I mentioned earlier, voters were economically vulnerable and saw the sale of votes as a means of  putting food on the table.

Furthermore, despite harsh criticism towards the authorities, opposition parties failed to capitalize on the President’s and the Prime Minister’s failures. To prepare for the upcoming elections, the parliament went into recess in late June, just when the country was facing the peak of new {COVID-19} cases. This resulted in deep political disappointment with the political establishment as such. When election day came, many voters could see no difference between Presidential loyalists and the opposition and the vote went to the highest bidder.

TJ. Eleven political parties are left without Members of Parliament. However, they appear to have the major mobilizing capacity in the streets. How powerful is the opposition?

Sadyr Japarov is a convicted kidnapper released during the post-election riots. He came to office as Prime Minister and then, following Jeenbekov’s resignation, as President. Officially, Jeenbekov abdicated voluntarily, but we all know that “street opposition” forced him to resign.

Currently Sadyr Japarov is considered to be the most probable winner of the upcoming presidential elections in January 2021. He is very popular. Some of his supporters go as far as to compare him to Nelson Mandela – implying that Mr. Japarov, too, is an unfairly prosecuted prisoner who was mistreated and tortured in prison and is now likened to a revolutionary leader.

But another noticeable factor is the determination and aggression of Mr. Japarov’s supporters. Numerous MPs have complained about threats and intimidation in the vote that brought Mr. Japarov to office as Prime Minister.

Although the newly formed government has been able to consolidate its political support and control over public administration, it is still struggling with international recognition. For a country heavily relying on international financial assistance this represents a strong challenge to this government’s political survival.