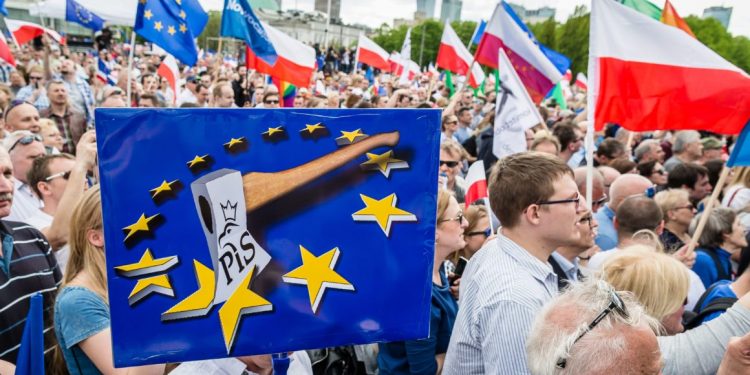 Concerned with the state of rule of law and democracy in Poland, the European Parliament kicked off its first day of the Brussels plenary with a debate on Poland’s violation of the rule of law and fundamental rights.

The concerns relate more specifically to the functioning of the legislative and electoral system, the independence of the judiciary and the rights of judges a well as the protection of fundamental rights.

MEPs discussed the issue on the basis of a report by which pushes urges Council to take steps against Poland. The issue has been flagged over the last three years with regard to the country’s respect for human dignity, freedom and democracy.

Specifically it concerns the challenges to the independence of the Polish judiciary, the reform of the justice system, the organisation of the courts and a new disciplinary regime for judges. Due to undue delays in court proceedings, the right to a fair trial is jeopardised.

The European Parliament also cites concern over media freedom, as the Polish public broadcaster’s editorial independence has been curtailed.

This report refers to the activation of the article 7 of the Treaty of the European Union (TEU). Article 7 was designed to prevent EU Member States from backtracking on the European values on democracy and fundamental rights.

An Article 7 procedure could lead to sanctions in case the European Council decides that there was a breach of rule of law and democracy.

So far the European Council has not expressed any willingness of taking steps against Poland. Nevertheless, MEPs are concerned that the lack of independence of the judiciary in Poland has already begun affecting mutual trust between Poland and other EU countries.

The Members of Parliament also brought up threats against minorities, in particular sexual minorities, in Poland with intolerance and hate speech towards the LGBTI community seemingly being tolerated in some regions. There has been dialogue with Poland on these issues, but MEPs were doubtful whether those have produced any results.

However, other MEPs point out that Poland as an EU Member should be approached through a dialogue with the Commission. Formal hearings following from an Article 7 procedure under the European treaties were last held in December 2018; in its report to be adopted Thursday, the Parliament calls on the Council to resume those hearings in view of the negative developments since then.

A rather small number of MEPs, most of them from the nationalist and conservative parties, asked the European Parliament not to take any action against Poland as the European Union should not interfere with the sovereignty of a Member State.