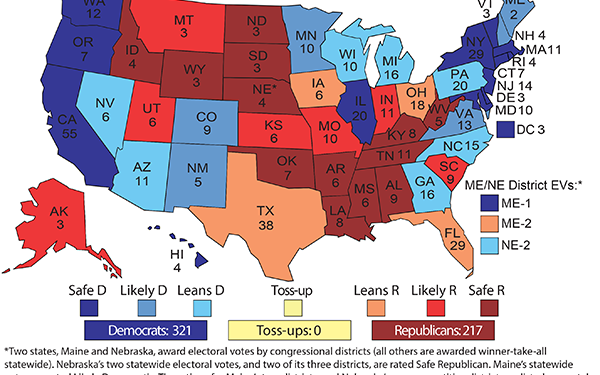 The rituals of election night in the US are familiar to anybody who has been through a few national elections. We know which states are solid for each of the candidates, which early calls are meaningless and which are significant. An early call for the Republican in Kentucky or Alabama or for the Democrat in New York may seem important, but it is not because those states are not competitive between the two parties.

Knowledgeable observers know which states matter and which counties in those states lean towards which party. The pundits and broadcasters like CNN John King expertly walk us through the results as we anxiously await news from Arizona, Ohio, Michigan or other battleground states. That is precisely what is occurring tonight. This intense focus on the electoral college is exciting and, at times, even fun, but it overshadows another important reality-that the electoral college is a deeply undemocratic relic that weighs the votes of some Americans more than others. That is an important part of the electoral story that remains true even on a night like this.