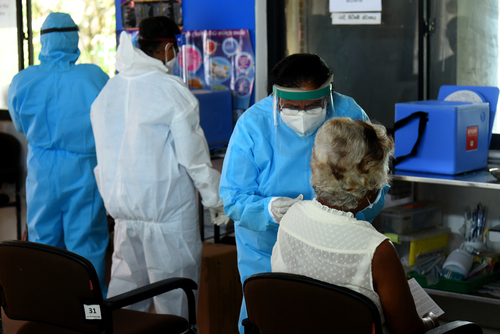 It serves the EU to ensure Bosnia and Herzegovina stems its COVID-19 health crisis by assisting the vaccination rollout, writes Željana Zovko MEP.

Brussels (Brussels Morning) As the COVID-19 vaccine has commenced its rollout across the EU, one part of Europe has been left behind: the Western Balkans, a region with many states seeking to join the bloc. Despite repeated assertions that much of the region is headed for Union membership, the EU still lacks a credible geopolitical strategy for the Balkans. These states on Europe’s southeastern periphery have struggled to access vaccines, the exception being Serbia whose vaccination program began three days before the EU’s.

Many Balkan nations pinned their innoculation hopes on COVAX, a global vaccine initiative set up by the World Health Organisation to address rising inequities of vaccine distribution. Bosnia and Herzegovina (BiH) has reserved vaccines through the scheme and has been expecting the amount of 1.23 million vaccines from the programme. By the end of March 2021, COVAX managed to deliver only modest quantities of vaccines to BiH, thus making it one of the last countries in Europe to start immunising its population against the virus.

Even though the vaccine has been developed at an unprecedented pace, when the distribution phase came, we witnessed a gap between the hollow words of solidarity and reality, which is overwhelmingly oriented towards particular national interests. According to Worldometer, BiH now ranks second worldwide when it comes to deaths from COVID-19 per 1 million of the population. More citizens are dying on average each day now than during the war in the 1990s. It renders the COVAX mechanism a disappointment, which has betrayed the expectations of BiH citizens.

The region rightfully criticises the EU and functionality of the COVAX system, which, considering their use of public funding to procure the vaccines, are fair game for censure. I have personally witnessed the tragedy that this country is going through and the uncertainty that still lies ahead.

It is clear now that COVAX cannot deliver enough doses to stop the rising death toll. The country eventually received few vaccine donations, including from Serbia, China and Turkey, negatively perceived in the public as a sign of the ineptness of the country’s own government. Furthermore, Russia and China are using this situation to expand their spheres of political influence, creating new geopolitical realities that will have an impact on the region for a long time.

By the end of May, BiH received some vaccine doses through COVAX and the EU4Health program, but unfortunately this is too little and too late. If there is another delay in delivery, it is certain that it will prolong the agony of the citizens of BiH when it comes to their right to protection from the pandemic.

The public is bearing witnessing to the announcements of new contingents more regularly but the vaccination process is not fast enough to allow the country to move from its bottom rank in terms of vaccined citizens.

In a state that has struggled with a dysfunctional political system since its independence, the pandemic revealed the full extent of BiH’s internal problems. Public officials are justifying their passivity with a lack of mandate, blaming each other for failing to act. Namely, BiH has a highly dysfunctional system of government, which is unprecedented in a modern world.

After delays to vaccine purchase through COVAX became clear, BiH authorities decided to buy vaccines directly from manufacturers. However, the laws of the country do not allow state institutions to conduct direct procurement without intermediaries. As a result, last year the government acquired face masks and respirators through a company that cultivates raspberries.

None of the 100 respirators procured by this company were functional, further undermining the trust of citizens in the state. BiH has been facing an outflow of professional medical staff for some time, as they go to work in richer countries in the West. Their departure was often prompted by political pressure and the lack of professional medical staff is especially visible now in the time of a health crisis. What we need in BiH is political consensus.

As a country with which Croatia and thus the EU share the longest geographical border, any kind of crisis can have a consequence on the Union’s stability and security. The migrant and health crises have shown that the borders of Croatia, and, therefore, the borders of the EU, will be under pressure. For practical reasons, Croatia is interested in having stability on its border.

Thirty years have passed since the dissolution of Yugoslavia. At first, the EU’s policy was based on humanitarian assistance and respect for international borders. After the Dayton Agreement it refocused its efforts on economic regeneration and Rebecca West style partisanship — pick a side according to its political narrative and support it at all costs. And with the exceptions of Slovenia and Croatia, which succeeded to extricate themselves from the region, the remaining countries are stuck with unresolved issues that caused the war.

As the co-rapporteur for the third-generation Instrument of Pre-Accession Assistance, a European fund worth more than 14 billion euro intended to help the Western Balkans, I deem that before spending more money on what appears to be noble goals — such as building roads and energy corridors — we should consider what lessons we have learned from the experience so far. We need to find European solutions for a European BiH.