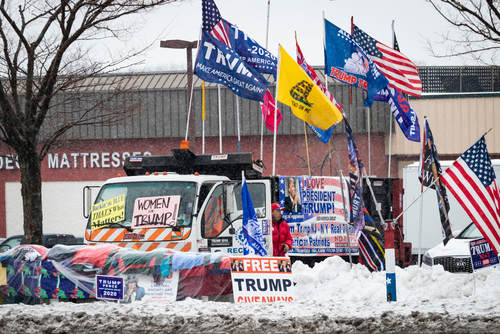 New York (Brussels Morning) The recent Conservative Political Action Conference (CPAC) was the world’s first glimpse of the post-Donald Trump Republican Party and that window made it clear the Republican Party is not post-Trump at all. Donald Trump’s speech on Sunday, which in tone, style and duration was very similar to one of his campaign rallies, capped off a weekend where it was made clear that fealty to Donald Trump, and the alternate reality that he created, is still the price of admission into today’s Republican Party.

The speakers at CPAC described an America where Donald Trump won the election, where COVID-19 was substantially a hoax and where the biggest threat to the country is not the coronavirus, climate change, income inequality or racial conflict. In the CPAC world the biggest threat facing America is that powerful white people are not getting as much attention as they might like and where there are occasionally meaningful consequences for racists words and deeds. The conservative term for this is ‘cancel culture’.

The embrace of the alternate reality and lies that defined much of the Trump era is a reminder that the democratic rollback and authoritarian threat of the Donald Trump presidency remains a significant part of the American political landscape. Under Donald Trump’s leadership the Republican Party consolidated its transformation from a conservative political force seeking to win power in a democracy, to a party of white grievance unconcerned with niceties like democracy or stability and focused almost entirely on getting and keeping power at any cost.

Although Donald Trump is no longer president, and the possibility of him returning to the White House is not great, there has been nothing approaching closure regarding the damage the Trump presidency did to American democracy. While most Americans should be relieved that Trump is unlikely to be president again, the bigger concern is that Trump will run, become the Republican nominee, lose again and, once again, mobilize his supporters around the big lie that the election was stolen.

CPAC also reminds us that the Republican Party is no longer interested in governing. Kvetching about cancel culture, demanding the government ignore a global pandemic and celebrating firearms is not governance. It is the ranting of an angry mob who just cannot believe that the majority of Americans disagree with them. The Republican embrace of the politics of grievance seems a better fit for a party that is out of power. Because the Republicans control neither house of congress nor the presidency, they are no longer burdened with having to solve problems or govern. However, from the tone of CPAC one could be forgiven for forgetting that as recently as two years ago, Republicans controlled both houses of congress and the White House. They used those majorities to pass a tax cut, deregulate and pack the courts, but not to do anything, even from a conservative perspective, to address the myriad problems facing the country.

No problem as big

The most obvious failure in this regard was the crime against humanity that was Trump’s response to COVID-19, but that can be understood in the context of the larger unwillingness of Republicans in Washington to even to try to constructively address problems such as climate change, gun violence, police reform or our crumbling infrastructure during 2017-2018 when they had the votes to pass legislation. There are market-oriented conservative ways to address all these problems, but the GOP passed on this when they had a chance and now what we heard from CPAC is that none of these problems are as important as ‘cancel culture’.

If CPAC is a harbinger of the future of the GOP, the state of American politics continues to be imperiled. CPAC was a toxic miss of the politics of aggrievement, deliberate ignorance of the major problems facing of the country and an almost worshipful attitude towards Donald Trump that was equal parts bizarre, pathetic and frightening. It was a reflective of a conservative movement that is not interested in governance or solving problems, will refuse to accept their next electoral defeat, remains in complete in denial about the reality of the insurrection at the Capitol on 6 January and views efforts to make America more tolerant and pluralist as “cancel culture”.

Given the strength of the two-party system in the US, when one party sinks this deeply into anti-democratic ideas such a refusing to accept a clear, and not very close, election defeat and fantastical thinking with regards to the major policy issues facing the country, the stability and the democracy will be in crisis regardless of who won the last election or who will win the next one.