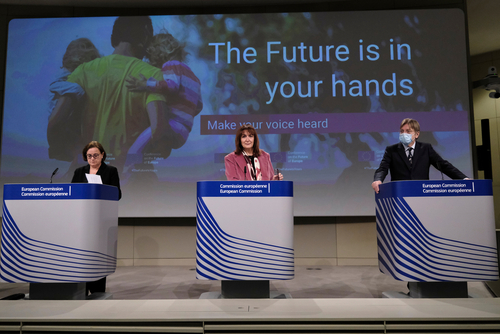 Brussels, Belgium April 19th, 2021. Member of the European Parliament Guy VERHOFSTADT attends in press conference on the launch of the digital platform of the Conference on the Future of Europe.

Belgium (Brussels Morning Newspaper) European Union policy-makers and citizens recently approved hundreds of recommendations brought forward by the Conference on the Future of Europe.
The Conference plenary — composed of citizens, MEPs, representatives from the EU Council and Commission as well as from member states — approved more than 300 proposals in a special session in Strasbourg.
These proposals are the conclusion of a year of work that saw hundreds of citizens come together to discuss how to make the EU work better along with nine themes including climate change, health, the economy and social justice, democracy, digital transformation, education, and migration.
The documents and proposals will be submitted to EU leaders on May 9. Many however may be shelved as they would necessitate changes in EU treaties which some member states are against.

In a statement for Brussels Morning Guy Verhofstadt MEP (Belgium, Open VLD), co-chair of the Conference stated that the Conference on the Future of Europe added a new perspective to EU politics, and brought citizens and elected politicians together around a series of measures to make the EU more effective, more tangible and more democratic.
“Now, we need to make sure we keep the momentum going. With today’s resolution, the European Parliament pushes to maintain the ambition in implementing the whole package, including the hardest parts where the Treaties need to be updated. We cannot let citizens down on this“ – he noted.

A similar point of has Pascal Durand MEP (France, Renaissance), Renew Europe coordinator of the Committee on Constitutional Affairs (AFCO), who added: “Our Parliament is moving towards political maturity. In the coming weeks, we will propose a reform of the treaties. We finally have the courage to change the rules governing the functioning of our Union, which no longer correspond to the needs of the moment and the expectations of our citizens. And because we are responsible for the aspirations of Europeans, we will use all the strength of our democracy to put forward these proposals for profoundly changing Europe, against the Member States that are too often timid, or even petrified”

Tags: Conference on the Future of EuropeMain-SliderOpinion section