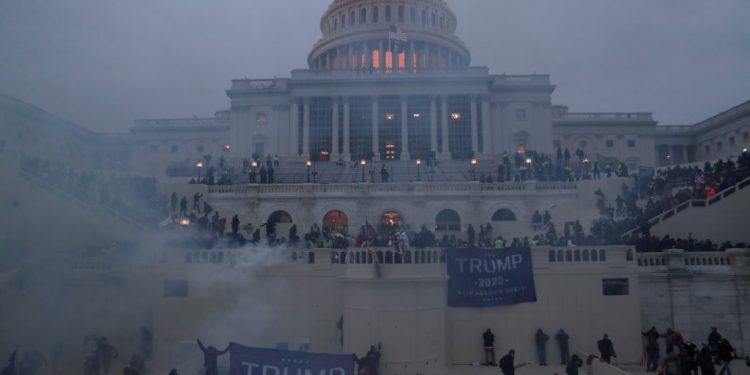 olice officers stand guard as supporters of U.S. President Donald Trump gather in front of the U.S. Capitol Building in Washington on January 6, 2021.

Washington DC (Brussels Morning) The trauma of it still lingers in my consciousness when watching the video of the assault on the US Capitol. Images of the confederate flag parading outside the Senate chamber in front of Vice President Richard Nixon’s bust is telling. That location is exactly where a bomb detonated in 1983 by radicals seeking the destruction of our government.

I was the investigator for the US Capitol police of the bombing. Duty to defend that building and all it represents as the seat of our beloved democracy is a part of me and many others. It now appears to have caused a 15 year veteran of the United States Capitol Police, Howard Liebengood Jr., to take his life after responding to defend the Capitol.

He was off duty. I knew his father, the Senate Sergeant at Arms at the time of the 1983 bombing outside the Senate Chamber, adding further tragedy to his “end of watch”. This respect and love of the institution continued in another capacity when I became the Director of Security of the Senate Select Committee on Intelligence. After a decade of service in the US Congress, I was shocked at what we witnessed in our nation’s capital with the call to combat by US President Donald J. Trump and his men and supporters.

A moment of shock

The world watched in shock as the iconic symbol of democracy, the US Capitol, was overrun by a violent mob. The siege of our nation’s capital occurred from both inside and outside the building. Fueled by the false storylines of massive rigged and stolen elections, the president called his followers to Washington and sent them forward to the Capitol for mayhem.

Enabled by the political opportunists who tried to advance their status as the inheritors of the Trump “legacy”, Senators Ted Cruz, and Josh Hauley, tried to usurp the constitutional process of affirming the Electoral College decision.

These men and their band of supporters attempted to advance their political reputations among MAGA followers at the expense of the common good and the constitution. Now, a New Jersey Congressman has alleged that Congress members led individuals on a reconnaissance mission around the US Capitol complex.

From the president down, they collectively lit the matches that ignited a combustible human storm building over the Trump years. This was the stage set for the defilement of our symbol of democracy and created an imminent threat to the life of Congressional members and the Vice President himself.

I have great concern after observing these collective actions, but not of the US Capitol’s police officers. Many of them fought valiantly against overwhelming odds. They were betrayed by their leaders. I direct my attention, especially to the Capitol Police Board, which oversees the police department. The Board is made up of the Sergeant at Arms of both Houses and the Architect of the Capitol.

They received intelligence warning of the danger ahead. It is they who are the final decisionmakers over the police chief. They clearly stood down the entire department and did not fully mobilise. The question is, why? Was this the heart of the seditious conspiracy?

What occurred in Washington on 6 January should have been considered a National Security Special Event. While not designated so, in fact, it was. There was a joint session of Congress, presided over by the Vice President. At the least, all leaves should have been cancelled, and all shifts held over for duty. Metropolitan Police should have had civil disturbance units on call.

Normally on joint sessions of Congress during my day or during a serious protest, the entire department was on duty. Beyond these facts, the vote to ratify the acceptance of the Electoral College was a constitutionally mandated activity and should have required such action.

The fact that this election was being contested by the president himself and he had called his most ardent supporters to Washington to protest the Electoral College formal acceptance required such precautions. Granted, this was unthinkable in the past, but intelligence indicated it was now needed.

The president’s rally called his supporters to DC and allowed any determined men of violence bent on mayhem to take advantage of the situation. This brought a highly charged group of people who believed that the election had been stolen together on the constitutionally mandated decision day for the election’s ratification.

If this could be stopped, maybe the results could be negated. After speakers fired up the crowd, the President sent them to the Capitol. No permit was issued, and no actions were taken to stop them or call on reinforcements to bolster the capital defense. When we made requests for National Guard deployment, they were rebuffed and delayed. The USCP police force, outnumbered, fought valiantly and ultimately saved the day until reinforcements arrived.

But why were there no ready reserve forces to deploy? Why were police in soft hats and bicycle barriers between the police and the angry mob? The questions accelerate.

In the run-up to the sixth, social media was filled with discussions on “What will we do if Pence doesn’t reverse this?” Others asked, “Who should we kill?”, “Police, ATF, Security Guards?”. Slogans appeared: “Storm the Capitol”, “Occupy the Capitol”. Given the tenor of the times, not to treat this as a real National Special Security Event was unconscionable.

Lies had poisoned the country’s conscience on the election that brought people to the breaking point. The question remains, was this exploited in a seditious conspiracy? I believe so. Each and every one of the participants and conspirators must be tried for sedition.

This must be thoroughly investigated and actively pursued by the authorities. I would start with the Capitol Police Board decision-making and organise an independent investigation to pull the information together for Congressional review.

The men and women of the Capitol Police were betrayed on the sixth. One of their colleagues lost his life after being bludgeoned by a fire extinguisher and another by his own hand.

Members of Congress, as well as the Vice President and their staff, were placed in a life-threatening predicament. This demands action and a judicial reckoning. It is now underway, and the US Attorney of the District of Columbia has opened over 170 cases at this point in time.

Hundreds more are expected. The dark question that can no longer be avoided is who was part of this dastardly insurrection conspiracy. I know the Congressional leadership will investigate hard but what about the Executive Branch?

The President who set this all in motion must be immediately removed from office before he causes more damage, and it could be much worse. As of today, the threats persist in all State Capitols and vigilance must be practiced not only for the inauguration but throughout the nation’s Capitols. The men of violence are actively planning sustained actions to continue the insurrection. It must be exposed and broken by our considerable federal, state and local resources.