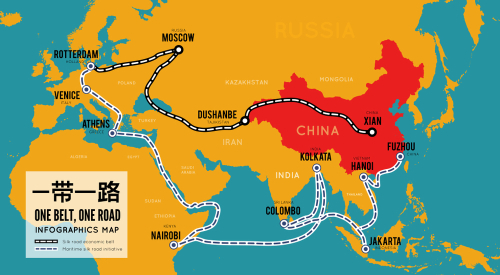 US President Donald Trump’s international development director Dr. Kaush Arha talks about how the US will seek to rival China’s Belt and Road Initiative as he leaves his position on the inauguration day of Joe Biden.

Washington DC (Brussels Morning) There is one thread of continuity between the Tump and Biden Administrations that observers are taking for granted. China will remain essentially a geopolitical competitor, even if there is some scope for coordination, and a big part of this competition is development aid.

China’s flagship Belt and Road Initiative is designed to build economic connectivity, but its emphasis on major infrastructural projects has geopolitical significance. On his last day in office, Brussels Morning talks to Dr. Kaush Arha, one of the leading figures in US development aid strategy for more than a decade. He sets out the financial, diplomatic, and strategic consideration of the “Blue Dot Network”, the merging counter-brand to the BRI, which reaches out to traditional western allies.

Before serving as the Trump Administration senior advisor for International Development Strategic Engagement (USAID), Arha was a senior advisor on Transition and Senior Coordinator for Agriculture at the US Embassy in Kabul, Afghanistan, and directed US agricultural assistance to Afghanistan across civilian-military agencies to meet the goals of agricultural development, counter-insurgency and counter narcotics. He previously served as the Associate Solicitor General and Deputy Assistant Secretary at the US Department of the Interior.

Tedo Japaridze. Traditionally, USAID offers reliefs and democracy-promotion support. Given the rise of China’s Belt and Road Initiative (BRI) across the developing world (Asia, Africa, Latin America, Caribbean), can you see America matching China’s development policy with comparable firepower? How problematic is that for the US?

Dr. Kaush Arha. I would say not only matching but exceeding China’s engagement.

Both in the short term and in the long run, I believe that liberal democracies and open markets have always triumphed over totalitarianism. One has to recognise that China’s brand of state capitalism has some benefits over previous systems but, ultimately, the laws of both physics and economics come to bear.

Even today, China raises a lot of its capital in the markets of Europe and the US. We have tried to limit that dynamic to restore a level of fair competition for US and European companies.

The main point here is to incentivise the financial markets of Europe, the US, and Japan to engage in the Central Asian region, and in so doing one can far exceed China’s overtures. Signalling out sectors I would say energy, infrastructure, transportation and digital. Across these sectors I am quite confident that mobilising the private sector in Europe and the US could singularly and certainly collectively exceed Chinese outreach.

TJ. For some time, there has been a discussion over the development of a Blue Dot Network that presents a counter-narrative to the BRI. What is this vision, what is the financial commitment behind it, and how does it engage American allies around the world?

KA. That is a great question.

Beginning from the financial commitment, the US mobilises the financial sector through two main vehicles: first, the Development Financial Corporation (DFC) and certainly our Export-Import Bank (EXIM).

Now, the funds available to the DFC have more than doubled from 29 billion dollars to 60 billion dollars annually, facilitating not only debt but also equity investments, not to mention assistance in the form of feasibility studies and technical assistance. More importantly, the maximum level of project financing was raised from 250 million dollars to 500 million dollars. Most importantly perhaps, a new bill made the nexus to American companies a preference but not a requirement, so that it is not about funding only ourselves but also our allies.

The EXIM Bank has a capital of 100 billion dollars that can be used to mobilise private sector engagement, usually at a rate of one (public dollar) to four (private). So, you can see that there are substantial funds there that can work in synergy with institutional investors ranging from pension funds to private funds, all of whom have trillion-dollar assets.

For most private funds, good infrastructure is an attractive investment. Both the DFC and EXIM have set a benchmark of standards as to what constitutes a good project that is based on 50-long years of experience, some of which were reflected in discussions in the G20 meeting in Osaka, Japan. They range from standards of economic viability during the project’s entire life-cycle to transparency, cultural and environmental sustainability. The point is also that such projects should strengthen rather than diminish national sovereignty.

Now, the Blue Dot Network is the branding of this quality infrastructure benchmarks, aiming to attract more private investment. I think that’s a robust and viable way of meeting infrastructure needs, founded on cooperation with our allies – engaging Japan and Australia, but also India and Latin America – and I am certain this will be picked up by the incoming administration. The money is there.

TJ. Are there any success stories already?

KA. We don’t want to rush things. We work closely with our G7 partners and India to complete the Blue Dot brand. But the infrastructural investment that will be branded “Blue Dot Network” already entails a transpacific undersea cable involving Japan and Australia – from California to Singapore – and you see substantial investment in energy infrastructure throughout the Indo-Pacific, South America. You also see the substantial commitment to places like the Caucasus, with substantial commitment to port development, rail and road links.

We expect these projects to be re-branded as “Blue Dot Network”.

TJ. Over the last few years America has been leaving behind multilateralism for plurinational regional frameworks. Is there enough bipartisan consensus in the US to develop grounded, cohesive and long-term plans for worldwide development? Can you see tighter cooperation with the EU in Central Asia and the Caucasus as well as the Pacific?

KA. Certainly. I think there’s ample room for complementarity between US regional strategies – Caucasus and Central Asia, Indo-Pacific, “Prosper Africa” – and EU connectivity strategies. The lines of effort are very complementary, or even the same, across a number of sectors: energy, digital, infrastructure or transportation.

There is a long history of cooperation, particularly between USAID and the EU Directorate-General for Neighbourhood and Enlargement Negotiations, particularly in the Caucasus, Central Asia and the European Neighbourhood and, therefore, we have a strong foundation to build on, particularly on energy. Strategies for Caucasus and Central Asia have in fact been developed in close coordination. I would encourage countries like Estonia and Poland on the one hand and Georgia and Uzbekistan on the other to create a forum and provide a framework on how these strategies can result in a connecting or cohesive bloc between Asia and Europe.

Both Europe and the US spend most of their development assistance funds in Africa. The Indo-Pacific is a region where the US works closely with Australia, Japan and India but we could see the engagement of Germany, the UK, and France. And there is certainly a lot more we can do in South America. Hopefully, the new Administration will provide new opportunities to develop cooperation.

TJ. In part, you addressed this question. China favours a state-led model of development that appeals to many governments in emerging economies. Is there a sense of renewed ideological competition when it comes to different approaches to development assistance?

Every state has a role in development. State is an essential part in development. That is not the issue. The real question is, “is the development centred around human liberty and dignity and individual prosperity, or is it a model of state capitalism with little scope for individual decision-making roles”? That is the heart of the matter and the ideological divide between free societies and state totalitarianism or authoritarianism, free markets and state capitalism.

On this, there is more than 70 years of what works and what does not. And while momentarily there is a temptation to reach out to funds with fewer strings attached, one sees that from Indonesia to the Maldives and the Philippines – where China is engaged – there is an asymmetrical economic relationship. I would encourage people to closely observe the Pakistan-China relationship, because that is the flagship of the Belt and Road Initiative. And how these countries come together will show whether China has a “value-added” or “value-subtracting” proposition to make.