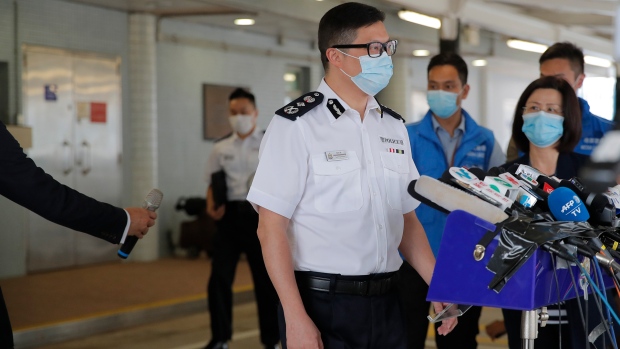 More than 10 Hong Kong residents, including an activist charged under the city’s punitive national security law, have been detained by China’s coastguard while trying to flee to Taiwan, according to reports.

China’s coastguard released a statement on Weibo saying that on Sunday at 9am, authorities in Guangdong tracked down a speedboat suspected of an illegal border crossing. The notice, posted on Wednesday evening, said more than 10 people had been arrested including two suspects surnamed Li and Deng.

Radio Free Asia and HK01 have reported that 12 young people were on the boat, headed for Taiwan, a distance of about 600km, where many democracy activists have fled after the implementation of a sweeping national security law. Citing unnamed sources, the two outlets said that the activist Andy Li was among the arrested.

On Thursday afternoon Hong Kong’s police chief, Chris Tang, told media he had heard the reports but the force had had no information about the arrests, and were actively seeking information from the mainland authorities.

Li – who has worked on raising global awareness of the situation in Hong Kong through ad campaigns and inviting foreign election observers for local polls last year – was previously charged with violating Hong Kong’s controversial new national security law and released on bail.

The national security police have so far arrested 25 people under the law. Li was arrested on the same day as Jimmy Lai, an activist and owner of the newspaper Apple Daily, on suspicion of collusion with external or foreign forces against national security. Only one of the 25 have been formally charged – Tong Ying-kit. Tong was denied bail at a hearing this week and will again appear before the court in October. The others were all released on police bail but some, including Lai, had their passports confiscated – a seizure that the Guardian understands has been allowed for national security law arrests.

According to the coordinates released by China’s coastguard, the boat was seized in South China Sea about 78km from Hong Kong Island.

This week the People’s Liberation Army has been conducting multiple live fire drills, including in the South China Sea. An area of water off the coast of Guangdong province, north of Hainan island, has been off limits to marine traffic, according to media reports.

It is not clear whether the arrested individuals will be sent back to Hong Kong or face charges in mainland China. The 12 youths are reportedly still in police custody.

The Chinese coastguard said in their statement on Wednesday that the case was still “under investigation.”

Under mainland law, they can be subject to up to one year in prison for illegal border crossing.