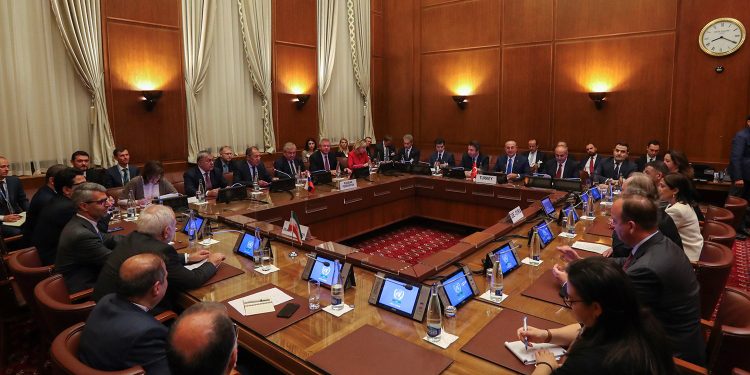 Representatives from Turkey, Russia, Iran, and other countries with stakes in the Syria conflict join United Nations Special Envoy for Syria Geir O. Pedersen at the Syrian Constitutional Committee meeting in Geneva, Switzerland,

Paris (Brussels Morning) A veteran diplomat and staunch defender of Syrian President Bashar al-Assad, Walid al-Muallem, died at the age of 79 on Monday due to unknown causes.

Muallem’s last public appearance was at the opening of an international refugee conference last week in Damascus, where he appeared to be in ill health, according to Deutsche Welle. Syrian state news agency SANA broke the news without disclosing his cause of death, although the Ba’ath Party member was known to suffer from heart problems.

He was one of the most prominent public figures of the Syrian regime and often featured in international media for his mocking of the opposition, calling them “terrorists” and “extremists” along the official narrative.

Defender of a brutal crackdown

In his support of al-Assad, Muallem condoned the government’s brutal crackdown on peaceful protesters in 2011. Since that time, more than 500,000 people have died in the conflict and millions have been displaced. The foreign minister’s hardline position against the rebels also became apparent during negotiations under UN auspices in Geneva. When former UN Secretary General Ban Ki-moon accused him of using inflammatory language, he responded: “You live in New York. I live in Syria. I have the right to give the Syrian version here in this forum”..

In response to the news, former Middle East correspondent Josie Ensor tweeted: “I once asked Walid Muallem at a press conference in Damascus in October 2016 how many civilians had been killed in government air strikes in Aleppo. “None”, he replied with a straight face”. Along with other senior officials, Muallem was sanctioned by the US Treasury Department in August 2011.

Having served at the Ministry of Foreign Affairs since 1964, Muallem was appointed foreign minister in 2006 and deputy prime minister in 2012. He held several posts including as the Syrian representative in the UK and Saudi Arabia and was Syria’s ambassador in the US between 1990-2000. He also played a key role in the failed negotiations with Israel in the 1990s. Relations with Iran and Russia, the regime’s main backers, were under his direct supervision. “We have lost a very reliable partner and sincere friend”, said Russian deputy foreign minister Mikhail Bogdanov as quoted by RFI.

More recently, Muallem led efforts to restore diplomatic ties between the regime and Arab states, which shut their embassies and recalled their personnel in response to the regime’s action on protestors. Syria was also expelled from the Arab League in 2011; its seat was taken later by opposition members.

The UAE reinstated its Damascus embassy in December 2018 with a charge d’affaires, claiming it wanted to normalise ties and curb the risks of regional interference in “Arab, Syrian affairs”, as Reuters reported at the time. The Gulf country was among those who sided with opposition factions, albeit less visibly than others, such as Saudi Arabia.

However, following the regime’s progress recapturing swathes of the country, more of the region’s states seek to reestablish relations with Assad. In October, Al-Jazeera reported Oman’s new ambassador’s arrival in Damascus, following years of continued relations in line with the country’s policy of strict non-interference.

Agence France-Presse quoted a source close to the Syrian government who said it was widely expected that Muallem’s deputy, Faisal Mekdad, would replace him as foreign minister.