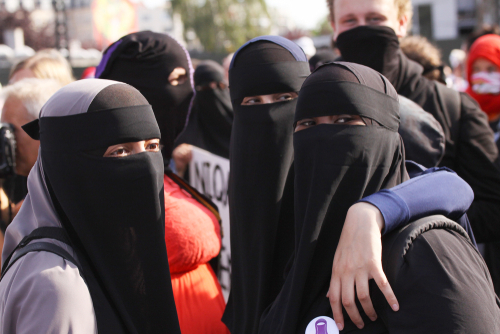 The referendum came in the wake of comparable bans in EU member states Belgium, France and the Netherlands, and follows after years of debate.

Under terms of the proposal, covering one’s face completely in public is to be outlawed, a measure polls indicate a slim majority of voters support. There is provision for exceptions to the regulation, such as in places of worship.

The referendum aimed at preventing protesters from hiding their identities during demonstrations.

Move seen as sexist and racist

While the proposal does not target the burqa or the niqab specifically, but rather the wearing of any and all full-face coverings, critics claim the ban is “absurd, useless and Islamophobic.”

Inès El-Shikh, a spokeswoman for the feminist organisation Purple Headscarves, insists the ban is “racist and sexist.”

According to the Federal Statistical Office, most Swiss Muslims are from the former Yugoslavia and do not favour the wearing of full-face veils.

A counter-proposal, in the event the referendum proposal failed to pass, required people wearing masks to show their faces to authorities for identification purposes, for example at border crossings.

The Central Council of Muslims asserted the referendum “further expands the principle of legal inequality, and sends a clear signal of exclusion to the Muslim minority”.

On the other hand, SVP member of the National Council Walter Wobmann pointed out that Muslim full-face coverings are “a symbol for this extreme, political Islam which has become increasingly prominent in Europe and which has no place in Switzerland”.

SRF broadcast projections indicated the measure would pass with 52% of votes in favour and 48% against, BBC reported Sunday.

After the final tally, the proposed ban passed with support of 51.2%.