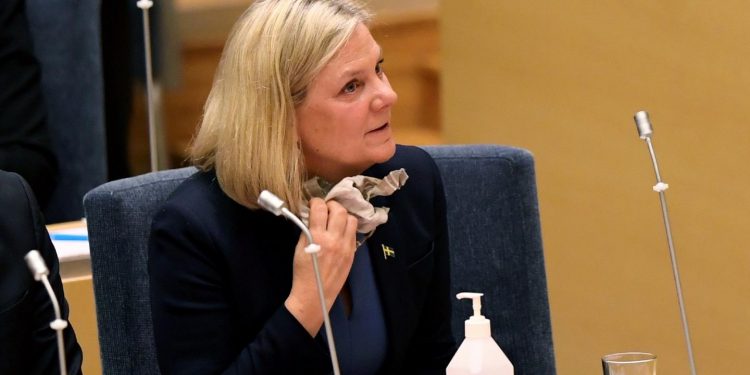 Brussels (Brussels Morning) On the day she was appointed Prime Minister by the Riksdag, Swedish Social Democrat Magdalena Andersson resigned, having held office for less than 12 hours before her minority coalition collapsed.

Andersson had faced a significant loss on her first day in office on Wednesday, since she was set to lose the budget vote to united opposition parties that were determined to push through their amendments and introduce tax cuts on petrol and higher spending on the justice system in a bid to curb the spread of gang violence in the country.

While Andersson expected to lose the vote, she told the press she would soldier on, saying “she could live” with losing the budget vote, keeping in mind that under the Riksdag’s principle of negative parliamentarianism it would require a majority of lawmakers to successfully oppose the PM-designate. The principle explains why minority governments are a not uncommon feature in Swedish politics.

The new PM’s determination to proceed was shattered, however, as the Green Party quit the ruling two-party coalition on Wednesday, prompting Andersson to offer her resignation on the very day she first assumed her position, as the country’s first female PM in its history.

Andersson still hopes to remain in power, counting on silent support from former coalition partners to prop up her single-party minority government. Both the Green Party and the former communist the Left Party signalled they would back her as prime minister again, while the agrarian Centre Party said it would abstain from the vote – which in effect would amount to backing her candidacy.

Centre Party head Annie Loof announced on Twitter on Thursday that her party would “open the door” for Andersson to be prime minister, emphasising that their goal is for Sweden to have a government that is not dependent on the populist, anti-immigration party Sweden Democrats.

Despite the splits between the centre-left and left parties in the Riksdag, they continue to hold a majority of votes in the parliament, with centre-right and right-wing parties unable to muster the requisite majority to prevent a centre-left candidate from becoming PM.