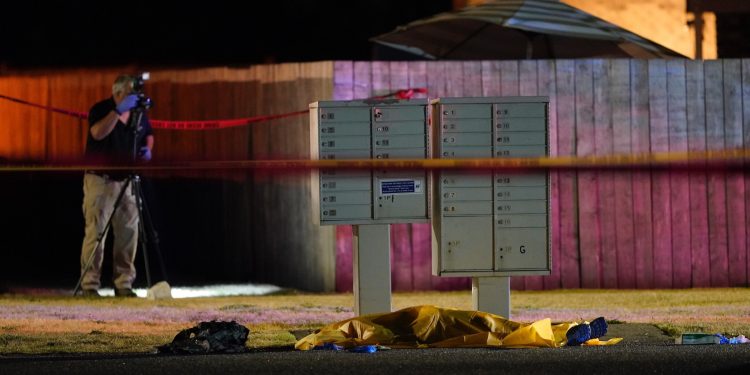 Officials work at a scene late Thursday, Sept. 3, 2020, where a man suspected of fatally shooting a supporter of a right-wing group in Portland, Ore., the week before was killed as investigators moved in to arrest him in Lacey, Wash. Michael Reinoehl, 48, was killed as a federal task force attempted to apprehend him in Lacey, a senior Justice Department official said. Reinoehl was the prime suspect in the killing of 39-year-old Aaron “Jay” Danielson, who was shot in the chest Saturday night, the official said. (AP Photo/Ted Warren)

A suspect in the killing of a far-right demonstrator in Portland, Oregon, was shot dead by law enforcement officers late Thursday night, officials said.

Michael Forest Reinoehl, 48, was shot by a federally led fugitive taskforce as he exited an apartment in Lacey, Washington, a Seattle suburb, said Pierce county sheriff’s spokesman Ed Troyer, according to the Olympian news site.

Four officers fired shots, officials said. A witness who was walking his dog in the area was quoted by the Olympian as hearing 30 to 40 shots being fired after two SUVs pulled up outside a block.

“As they attempted to apprehend him, there was gunfire,” Lt Ray Brady of the Thurston county sheriff’s office told the New York Times.

The details of Reinoehl’s killing were unclear. Brady said that responding officers reported that Reinoehl was armed and had entered a vehicle when he was shot, but neither detail had been confirmed.

An arrest warrant for Reinoehl had been issued earlier in the day. Reinoehl, a regular attendee of anti-racism protests in Portland, was suspected of killing Aaron “Jay” Danielson, 39, a supporter of the far-right group Patriot Prayer, which staged a counter-demonstration against anti-racist protesters in Portland last Saturday.

At some point in the melee, Reinoehl is alleged to have fired on Danielson. In an interview published in Vice on Thursday, Reinoehl, described as an army veteran and father of two, claimed that he and a friend were facing an assailant armed with a knife and claimed he acted in self-defense.

“You know, lots of lawyers suggest that I shouldn’t even be saying anything, but I feel it’s important that the world at least gets a little bit of what’s really going on,” Reinoehl told freelance journalist Donovan Farley. “I had no choice. I mean, I … I had a choice. I could have sat there and watched them kill a friend of mine of color. But I wasn’t going to do that.”

Critics of Donald Trump accuse him of fueling tensions by sending in unmarked federal troops to arrest demonstrators, by exaggerating violence in the city, and by cheerleading counter-protesters who have come from out of town to confront demonstrators.

A friend of Danielson, who lived in Portland, told CNN that Danielson was not an agitator but a “freedom-loving American.” Joey Gibson, the organizer of the Patriot Prayer group that Danielson supported, said in a Facebook post: “We love Jay and he had such a huge heart,” Gibson wrote. “God bless him and the life he lived.”

Federal agents from the FBI and the US marshals service had located Reinoehl on Thursday after a warrant was issued for his arrest, Troyer said.

Brady said the Pierce county fugitive apprehension team, working with US marshals, was in the area looking for a wanted homicide suspect when they saw him come out of an apartment. They said he appeared to be armed.

“The suspect came out to the car,” Troyer said. “They attempted to put him into custody and shots were fired.”

On Monday it emerged that Portland police were reported to have launched a homicide investigation focused on a BLM supporter.

Trump, who highlighted Danielson’s death in tweets earlier in the week and defended his supporters’ use of paintballs against BLM protesters, posted on Twitter moments before the story broke: “Why aren’t the Portland Police ARRESTING the cold blooded killer of Aaron ‘Jay’ Danielson.”